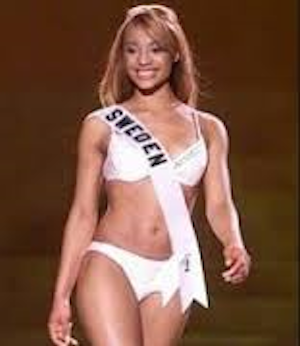 Malou Hansson, a Miss Universe competitor in Puerto Rico in 2002, was crowned Miss Sweden earlier that year.  She had just turned 19 at the time. Miss Sweden was born Malou Mercedes Hansson on February 2, 1983, in Järfälla, a Stockholm suburb. Her mother is from Ghana and her father is a Swede.

Before winning the contest Hansson worked as a model while studying information technology in school. She won the regional Miss Uppland pageant and subsequently won the Miss Sweden pageant on February 25, 2002.  She went on to compete in the Miss Universe pageant held in Coliseo Roberto Clemente, San Juan, Puerto Rico on May 29, 2002, but did not qualify for the semi-finals.

Hansson returned to Sweden and soon afterwards became a film actress.  She had minor parts in the short movie Stockholm Boogie (2005), the feature length film, Bloodbrothers (2005), and the movie Gangster (2007) where she had a leading role as “Nathalie” along with well-known Swedish actors Kjell Bergquist and Mikael Persbrandt.  She also appeared in the DVD video Sökarna-Återkomsten (2006).  In 2005 Hansson, and other women who had worked on TV or in movies, was stalked by a sexual predator.  He was eventually caught and convicted.  For some years Hansson lived in continental Europe and the United States where she worked as a model and public relations agent.

Malou Hansson is part of a tradition of Swedish beauty pageants that extend back to 1949.  The first pageants were sponsored by the magazine VeckoRevyn up to 1999 and were co-arranged with the commercial Swedish TV channel 4. In March 2001, the contest was publicly criticized by a feminist group which considered it demeaning to women.  Their protest, along with diminishing interest in beauty contests, led to the Miss Sweden brand’s sale to Modern Times Group (MTG), a media company which had among other holdings, the commercial channel TV3.

While Malou Hansson was the first Swede of African ancestry to win the Miss Sweden contest, she was not the first person of African ancestry to compete. Other black Miss Sweden contestants have included popular singer Jessica Folcker (1993), and model Ida Sofia Manneh (2001). Malou Hansson’s sister, Nana, competed in the Miss Stockholm pageant in 2001.

Malou Hansson is married to Erik Nilsson and lives in Stockholm.