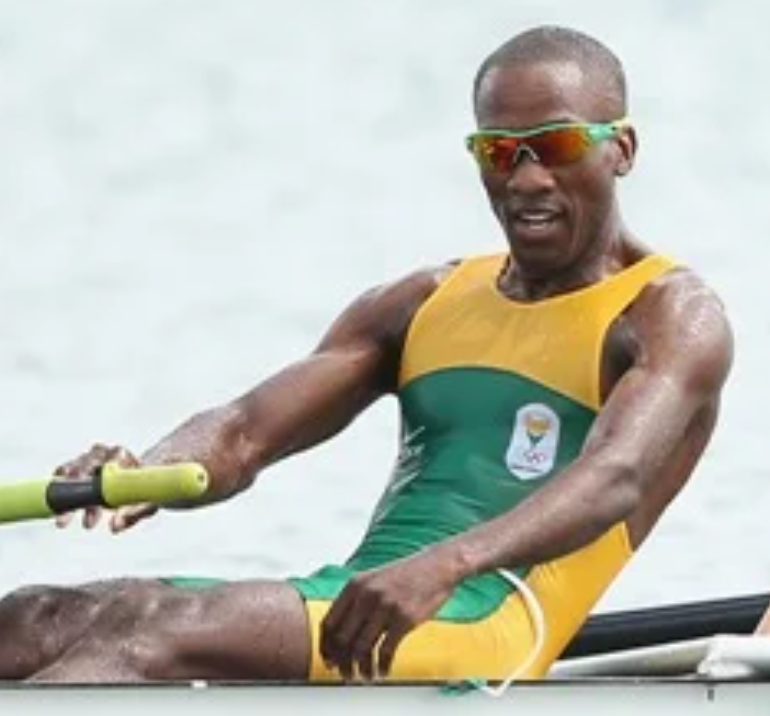 Born in 1980 in apartheid-dominated Johannesburg, South Africa, Sizwe Lawrence Ndlovu was a member of a family of seven.  His interest in athletics began when he was exposed to the typical South African sports, cricket, European football, and rugby.  Once he became older, he discovered rowing, which would become his major sport.

Ndlovu began his rowing career at Mondeor High School in Johannesburg in 1997.  At his high school, he was one of the four black students participating in the sport.  By the end of the first season, he was the only person of color that remained.  Ndlovu’s natural drive and hard work endeared him to his teammates who gave him the nickname “Seize.”

Ndlovu began his international rowing career in 1999 at the age of 19 when he was a part of the junior men’s quadruple sculls that went to the world championships in Plovdiv, Bulgaria.  Following high school, Ndlovu pursued his education at the University of Johannesburg.  He rowed for South Africa in international competition while training to become an IT technician. While at the University of Johannesburg, he developed his sweep rowing technique which entails using one oar instead of two to propel the boat.  Following his time in University, Ndlovu continued his rowing.

In 2002, Ndlovu rowed in his first world cup in Lucerne, Switzerland.  The world cup is usually a precursor to world championships or the Olympics.  His main event was the lightweight men’s straight four.  Ndlovu required constant training and dedication to the sport to maintain his peak physical fitness and competitiveness at such an elite level.  He quit his job to keep training.

After multiple years of world championships and world cups, Ndlovu and his team finally raced to qualify for the 2008 Olympics in 2007.  Unfortunately, at the regatta in Poznan, Poland, the South African team was beaten out by the Germans and the Irish.  Not giving up, Ndlovu continued pursuing his career of winning a Olympic gold medal and would get a second chance in 2012.

After qualifying for the regatta, Ndlovu and his team faced tough competition.  In their heats, they placed second behind the Swiss team which allowed them to go straight to the semi-final.  In that competition South Africa placed second behind the Danish.  They began the final in third place for the first quarter of the 2000-meter race; they fell back into fourth through the halfway point.  During the last 500m Lawrence Ndlovu who was setting the pace for the boat in stroke seat, took his crew up in tempo pushing them past the Australians, the Danish, and the favored Great British on their home course.  Ndlovu finally reached his dream: becoming an Olympic Champion, and the first black male to win an Olympic gold medal in rowing.

Following the race, Ndlovu’s team was named the 2012 sports team of the year for South Africa, World Rowing crew of the year for 2012, and included in the Top 200 Male and Guardian young South Africans list in 2013.  He was appointed to the World Rowing FISA athletes’ commission in 2014.  Currently, Ndlovu is a coach of the women’s rowing team at the University of Johannesburg.