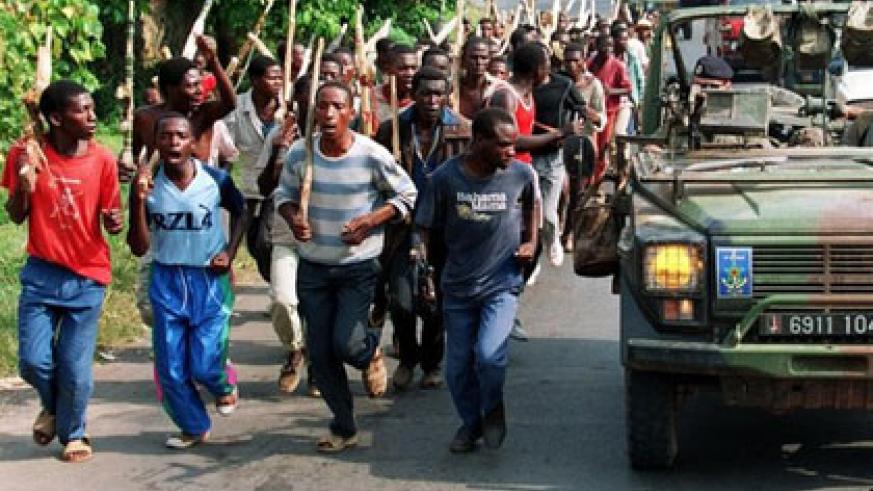 Interahamwe, translated from Kinyarwanda to English as “those who work/ fight together,” is an African paramilitary and terrorist group currently based in the Democratic Republic of the Congo and Uganda. Composed mainly of young Hutu men, Interahamwe was one of the major belligerents against the Tutsi in Rwanda, leading the mass genocide of Tutsi civilians and Hutu political enemies during the Rwandan Genocide in 1994. Since fleeing Rwanda after the end of the genocide, most western and African nations have classified the group as a radical terrorist organization.

Interahamwe officially began as the small youth wing of the larger Hutu ruling party of Rwanda, the National Republican Movement for Democracy and Development (MRND), led by the then president of Rwanda, Juvénal Habyarimana. Very few of these original members had any paramilitary training.

Since its start as the MRND youth section, what many define as the “Interahamwe” has changed dramatically. As violence in the country escalated during the civil war, the definition of “Interahamwe” slowly turned from an innocuous youth group into a broad grouping of almost anyone who was engaged in the active killing of Rwandan Tutsis, regardless of their membership with the MRND. Still, the MRND backed, and actively encouraged, the slaughter of Tutsi civilians by the hands of the Interahamwe and a similar, albeit much smaller group, the Impuzamugambi.

On October 1, 1990, the Tutsi-backed Rwandan Patriotic Front (RPF) invaded Rwanda with the goal of taking back the land that was taken from them after an anti-Tutsi coup d’état drove them out of the country in 1959. This invasion started the Rwandan Civil War, which lasted until August of 1992, when president Habyarimana signed the Arusha Accords, bringing a cease-fire to the country as well as an agreement to give the Tutsi rebels some government power.

Many of the Hutu extremists of the country were adamantly opposed to this policy, and when, on April 6th, 1994, an unknown assailant shot down president Habyarimana’s private jet, violence began. Fueled by anti-Tutsi rhetoric broadcast by government radio and the fear of a Tutsi uprising, the Interahamwe began slaughtering their Tutsi and moderate Hutu neighbors, killing between 500,000 to 1,000,000 political enemies and Tutsi civilians during a span of 100 days, creating one of the worst mass killings of the 20th century.

The genocide ended on July 15th, 1994, when the RPF took control of most of Rwanda, preventing any further killings by the Interahamwe. The RPF drove the Interahamwe—as well as many other Hutu and Tutsi enemies—out of Rwanda after their securing of the country, generating up to 2,000,000 refugees. Many of these refugees, along with a majority of the remnants of the Interahamwe, fled to eastern Zaire (modern Democratic Republic of the Congo), where they still operate to this day, albeit with significantly fewer numbers and much less power.

Few members of the Interahamwe faced prosecution for their involvement in the genocide. Only 41 people were convicted through the International Criminal Tribunal for Rwanda (ICTR) although most were leaders who often faced life sentences in prison. Almost everyone else who participated in the slaughtering of Tutsis faced no consequences.