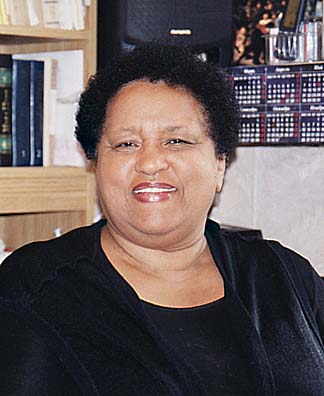 Liya Oliverovna Golden was the prominent black Russian social activist, scholar, and mother of Russian TV star Yelena Khanga. Liya Golden—also known as “Lily”—was born on July 18, 1934 in Tashkent, Uzbekistan. She was a daughter of Oliver Golden and Bertha Golden, who immigrated to the Soviet Union from the United States in 1931. Lily’s father died when she was 6 years old. After her father’s death, Bertha Golden and Lily had planned to return to United States, but due to World War II and Bertha’s lingering fears of racism in the United States, they never left Uzbekistan.

Lily’s Golden racial background, an unusual combination of African American, Native American, Jewish, and Russian ancestry, was, she claimed, the main motivation for her fight against racial injustice. She says: “I belong to all races. I am African American, a Polish Jew, and a Red Indian who became Russian in everything but blood.”

Golden graduated from high school and attended music school at the Tashkent Conservatory. As a pianist, she enjoyed jazz, won multiple music contests, and even became a local sensation. In 1948 she also became a tennis champion in Uzbekistan and won 4th place in the Soviet Union.

Golden graduated from Moscow State University in 1957 as a historian majoring in African American History. She dedicated her life to teaching and researching that field. After graduating from Moscow State University, she worked for the Institute of Oriental Studies in a department that focused on African Studies. In 1959, the Soviet Academy of Sciences opened the African Institute where Golden worked for over 30 years, publishing books on Africans living in Russia, African music, and over a hundred articles.

In 1960 Golden married Abdul Kassim Hanga who was a former vice-president of Tanzania. Abdul and Lily were married for 8 years until Abdul was severely tortured and killed in 1968 by Zanzibar Police.  During their marriage, they had one daughter, Yelena Khanga.

In 1988 Lily Golden moved to the United States and became famous as a black Russian activist, fighting for minority causes and racial harmony. In 1992 she began teaching at Chicago State University in Illinois, where she worked for more than 10 years. Throughout the remainder of her life Golden lectured in numerous European and Asian countries and in 2003 she published an autobiography about her life as a dark-skinned Russian struggling against changes in Soviet Union called My Long Journey Home.

Golden returned to Russia in 2003 to be closer to her newly-born granddaughter.  She continued to be active in several public organizations: The Center for Civic Initiatives (member of the Board of Directors), African American Leaders and African President Summit, International Intercultural Institute for Black Women, Zhuravlik International Charitable Fund, the Lily Golden Foundation and others. She became the official representative for some of these organizations at the United Nations. Golden was also a member of the Board of Trustees of the Non-Governmental, Russian-African Business Council.

Liya Oliverovna (Lily) Golden died on December 6, 2010 in Moscow, Russia after a long illness.  She was 76.