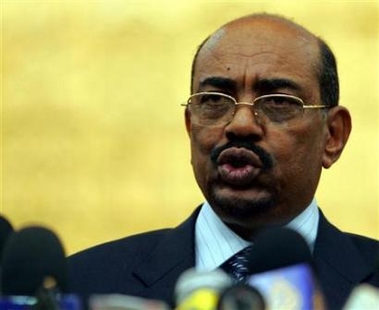 Omar Hassan Ahmad al-Bashir (or Umar Hassan Ahmad el-Bashir) became president of Sudan in 1993 but first gained military power in 1989 during an Islamist-backed coup. He was born in the northern Sudan village of Hosh Bonnaga in 1944.

Bashir’s military training began in 1960 when at the age of sixteen he joined the Sudanese army. Six years later he graduated from the Sudan Military Academy located near Khartoum. Bashir was sent for duty in the Egyptian army during the October 1973 Arab-Israeli war. After the war he steadily rose to prominence. From 1989 to 1993 he served as the Sudanese minister of defense.

In 1989, Bashir led his troops in overthrowing Prime Minister Sadiq al-Mahdi who was on the verge of signing a peace treaty with the Sudan People’s Liberation Movement. The peace treaty would have allowed southern Sudan to be controlled by secular laws instead of the Sharia law that Bashir and other Muslim military officers demanded. After the successful military coup, Bashir was appointed to lead the Revolutionary Command Council (RCC). As head of the council he dissolved political parties and dismissed all other state governing bodies.

In 1993, Bashir became president of Sudan and appointed Hasan al-Turabi, a radical Islamist, as his vice president. Together, Bashir and Turabi made Sharia law the only legal system in Sudan. They also intensified the military campaign to defeat the Sudan People’s Liberation Movement in what was called the Second Sudanese Civil War, beginning in 1983 and lasting 22 years.

As the southern Civil War wound down, Bashir turned his attention to the Darfur region in western Sudan. In 2003 he began a campaign to remove the indigenous people from the region partly because of their earlier support of the Sudan People’s Liberation Movement. Bashir and the government-sponsored militia group, Janjaweed, were accused of using rape, murder, and torture against non-Arabs in Darfur. During the two-year conflict, an estimated 500,000 people were killed, over 2,000 villages were burned, and 2.5 million of the nation’s 40 million people were forced to flee to refugee camps both in Sudan and neighboring Chad.

Because of the scale of what was increasingly called the Darfur Genocide, the International Criminal Court (ICC) in The Hague, The Netherlands, indicted Bashir in July 2008 on charges of genocide, crimes against humanity, and war crimes in Darfur. He was the first sitting president to be indicted by the ICC. In 2009, the ICC issued a warrant for Bashir’s arrest.