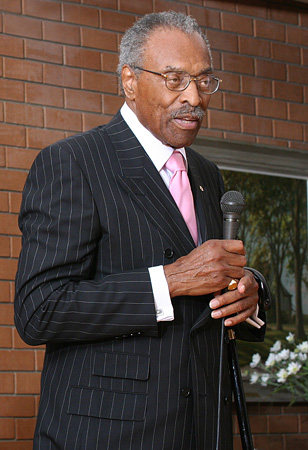 Lincoln Alexander, prominent attorney and politician, was born on January 21, 1922 in Toronto, Ontario, the son of West Indian immigrants. His mother was a maid, and his father a carpenter by training.  In Canada, however, he had to work as a railway porter, which in those days was one of the few jobs available to a man of colour.

In 1942 Alexander joined the Royal Canadian Air Force and served in Europe during World War II. Following the war, he attended McMaster University in Hamilton, receiving a degree in History and Political Economics in 1949. Continuing his education, he graduated in 1953 with a law degree from Osgood Hall Law School in Toronto. Initially, employment proved difficult when many established law firms turned him away.  In 1954 Alexander joined the first interracial law firm in Canada, Miller, Tokiwa and Isaacs in Hamilton.  In 1962 he became a partner in the firm and three years later was appointed Queen’s Counsel.

Alexander began his political career in 1968, when he was elected Canada’s first black Member of Parliament.  He represented Hamilton West in the national assembly. As the first black person in Parliament, Alexander attracted much publicity.  While he did not concentrate on civil rights issues, Alexander nonetheless became nationally admired, particularly by Canadian blacks.  While in Parliament, Lincoln Alexander focused on immigration reform, relief for Biafra in the Nigerian Civil War, and urban renewal.  He also supported the Official Languages Bill.

Alexander was re-elected in four federal elections, and served in the House of Commons for nearly twelve years. In 1979 when the newly elected Progressive Conservative government gained power, Alexander was appointed Minister of Labour and thus the first black cabinet minister in Canada’s history.   Alexander held the post for nine months until the Progressive Conservatives were swept from power in the winter of 1980.  Later that same year Alexander resigned his Commons seat to accept an appointment from Prime Minister Joe Clark as Chairman of the Workman’s Compensation Board of Ontario.

In 1985, on the recommendation of Prime Minister Brian Mulroney, Alexander was appointed Ontario’s 24th Lieutenant Governor. He became the first member of a visible minority group to serve in that vice-regal office in any province in Canada. Official duties of that office include summoning and dissolving Ontario’s legislature, reading the Speech from the Throne at the opening of each legislative session, and giving assent to bills passed by the legislature.

Alexander has been the recipient of many awards and honours which include being appointed a Companion of the Order of Canada by the Governor General of Canada. In 1992 he was appointed to the Order of Ontario and was inducted into Hamilton’s Gallery of Distinction.  Alexander published his memoirs in 2006 when he was 84 years old. Lincoln MacCauley Alexander died at his home in Hamilton, Ontario on October 19, 2012.  He was 90.