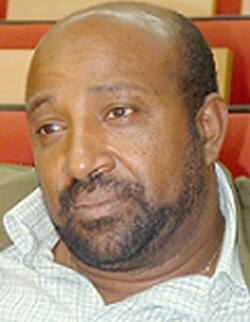 Berhanu Nega was elected mayor of Addis Ababa, Ethiopia in the Ethiopian general elections, 2005. He is a founding chairman of the Rainbow Ethiopia: Movement for Democracy and Social Justice and a Deputy Chairman of Coalition for Unity and Democracy (CUD), for which he served as chief election campaign strategist.

Nega attended Addis Ababa University where he participated in his freshman year in the student movement against the ruling Derg government headed by Colonel Mengistu Haile Mariam. When the government acted against political dissidents in 1977, Berhanu Nega fled with other radical student activists to Mount Asimba in northern Ethiopia.  Captured by government forces, he was held for several months before being released.  Nega crossed into the Sudan where he lived for two years until he was granted political asylum in the United States.  From the United States Nega led a faction of the opposition to the Derg regime.  Nega also received a B.A. degree in Economics from the State University of New York at Stony Brook and a Ph.D. in the same field from the New School for Social Research in New York City.  Nega taught economics at Bucknell University in Lewisburg, Pennsylvania.

Three years after the fall of Mengistu Mariam in 1991, Nega returned to Ethiopia and became an entrepreneur and academic. He founded Agro-Maize, a fertilizer company, and established Addis Village Family Home Builders.  Nega also served as president of the Ethiopian Economic Association from 1996 to 2000. He has also served as the head of the Ethiopian Economic Policy Research Institute, a nonprofit organization that he helped to establish.  The Institute generated programs it believed would strengthen both the economy and Ethiopia’s fledgling post-Derg democracy.

Nega also worked as a consultant to the United Nations Economic Commission for Africa (ECA). During the 2005 elections, Dr. Berhanu Nega led the opposition political coalition against then Prime Minister Meles Zenawi.  He participated in a series of televised political debates with the Prime Minister and other ruling party members which are generally credited with generating the public support of the CUD in Ethiopia’s major cities.

Although the national election results were disputed by Nega’s Coalition for Unity and Democracy, he continued to be active in politics and on August 20, 2005, was elected mayor of Addis Ababa.  His election marked the first time a mayor had been popularly elected in Ethiopia’s capital city.