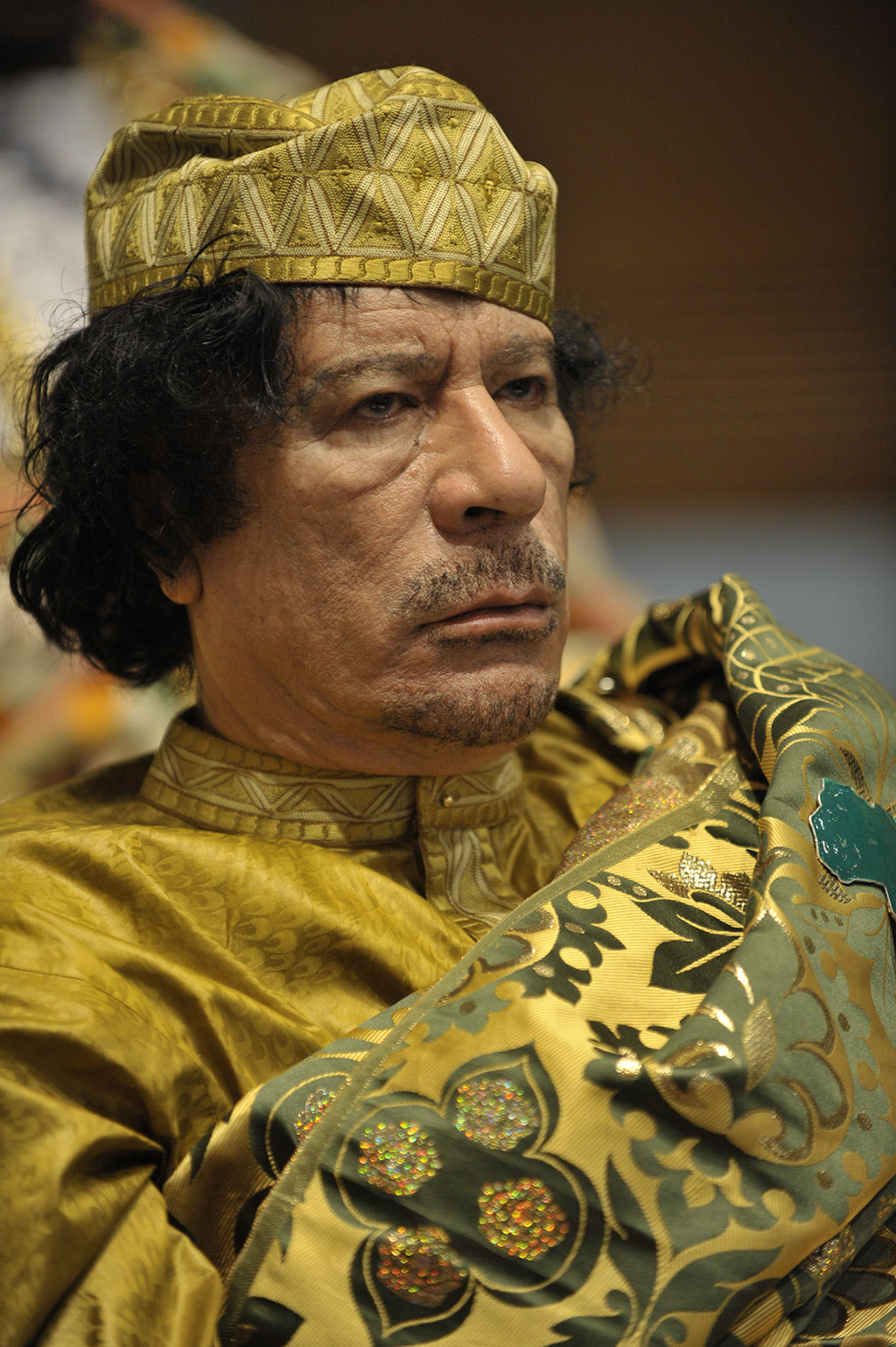 Muammar al-Qaddafi has been Libyan head of state since 1969 and one of the most controversial and divisive leaders in the Middle East and Africa in the twentieth century.  Qaddafi was born in the spring of 1942 to an Arabized Berber family near the Sirt desert on Libya’s northern coast.  He was sent to a local primary school in central Sirt, where he was taunted for being of impoverished Bedouin background. At nights, he slept in the neighborhood mosque and returned home to the city’s outskirts on weekends and holidays.

From 1956 to 1961, Qaddafi attended preparatory school in Sebha. He became fascinated with Gamal abdel-Nasser, who was then at the height of his popularity in the Arab world. Qaddafi was expelled his final year for involvement in a demonstration against the dissolution of the United Arab Republic, having earlier led protests against Patrice Lumumba’s assassination and in support of anticolonial struggles in Africa. It was at Sebha, however, that Qaddafi organized the Command Committee, many of whose members would go on to lead his Revolutionary Command Council (RCC) when in power.

Qaddafi completed schooling in Misrata and then attended the Military Academy in Benghazi with three of his Sebha comrades. They formed what would become the Free Unionist Officers Movement. By 1966, Qaddafi was commissioned into the army’s signal corps near Benghazi, where he furthered collaboration efforts against the then ruling Sanusi monarchy.

Three years later, and at the age of twenty-seven, Qaddafi had effective control of Libya, having pushed out rival coup factions and installed the RCC. Like a number of regional leaders, Qaddafi implemented a number of populist concessions, at least early on. These included the removal of U.S. and British military bases, the use of oil wealth for domestic social programs and support of Arab and Palestinian allies, large-scale public ownership, free education, and the nationalization of major industries. Italians were expelled and their property confiscated.

The native Jewish population was also largely expelled, though Qaddafi cited political reasons and, in a characteristic gesture, offered Libyan passports to a small ultra-Orthodox Jewish sect opposed to Zionism. Throughout his reign, with the exception of the periodic release of political prisoners, Qaddafi has actively suppressed the opposition, even assassinating Libyan dissidents abroad. By the 1980s, a number of his economic policies and expensive projects failed, in some part due to declining oil revenues and uninformed decision-making. Stagnation and unpopular government-imposed austerity measures followed.

Throughout his rule, Qaddafi has supported radical, separatist, and extremist factions extending from Ireland and Spain to Sri Lanka and El Salvador as well as anti-government groups throughout Africa. This support was often financial and sometimes political and military. The overarching objective, seemingly, has been to destabilize or counter the current global order.

By the first years of the twenty-first century, however, Qaddafi had begun a radical realignment of his geostrategic position, partly in adaptation to changing political realities. Qaddafi made amends to the West and developed key economic and personal relationships with Italy’s Silvio Berlusconi and Britain’s Tony Blair, among others.

In February 2011, antigovernment rebels, motivated by regional revolts, particularly those originating in Egypt and Tunisia, overtook large areas of eastern Libya, forming local councils of governance. Qaddafi resisted, launching a bloody counteroffensive.  In August, Qaddafi and his supporters lost control of Tripoli and on October 20, 2011, Qaddafi was captured and killed when the city of Sirte fell to rebel forces.