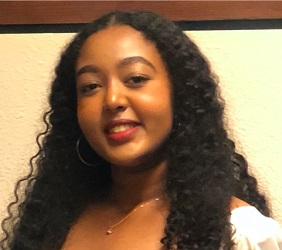 Nour Sabah Suliman is a Political Science major at Texas A&M University. Her aspiration and passion in life are to fight for the rights of those who are unable to defend themselves. As such, Nour intends to dedicate her life to her community by serving as an Attorney at Law. Her first taste of civil servitude began when she founded an organization named It’s Well Worth It in 2016. The organization works towards building a series of water wells in Sudan. Being of Sudanese descent, Nour has a vested interest in not only raising money but raising awareness about the severity of poor water quality in a country that holds such a special place in her heart. Originally Sudanese, born in Illinois, raised in Alabama, and grew up in Qatar, Nour is multifaceted. She will be known for having left footprints behind for others to follow in on the path to a more just and fair society.

Madeline M. Turner is the inventor of Turner’s Fruit-Press (the original blueprint/ design on which all modern juicers are based). The machine engineered by Turner allows consumers to enjoy the beverages we know as juices as well as juice bars and popular juice cleanses. It … END_OF_DOCUMENT_TOKEN_TO_BE_REPLACED