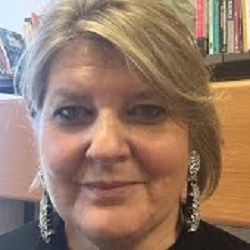 Hilda Bastian is a scientist, blogger, and cartoonist, and an active Wikipedian. She was a consumer advocate in Australia and internationally in the 1980s and 1990s, and a citizen scientist in epidemiology before moving into systematic reviewing and meta-research. She was one of the founders of the Cochrane Collaboration, an international organization that systematically reviews evidence on the effects of health care, and established its Consumer Network. She has been a senior scientist at the national Institute for Quality and Efficiency in Health Care (IQWiG) in Germany and at the National Institutes of Health (NIH) in the United States, and blogged at PLOS (Public Library of Science), Scientific American, and the James Lind Library.

Research scientist Jane Hinton was born on May 1, 1919 in Canton, Massachusetts. Her mother, Ada (Hawes) Hinton, was a former teacher, and her father, William Augustus Hinton, was a bacteriologist and one of the most prominent African American medical researchers of his era. In … END_OF_DOCUMENT_TOKEN_TO_BE_REPLACED