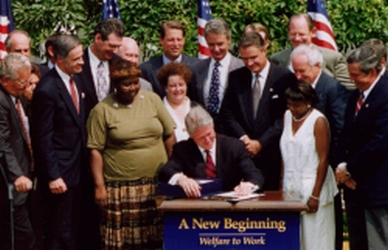 On August 22, 1996, President Bill Clinton signed the Personal Responsibility and Work Opportunity Act which ushered in the most sweeping changes in the welfare system since its adoption as part of the Social Security Act of 1935. In the following account, former White House staffer and now University of Washington Assistant Professor of History Margaret O’Mara describes from an insider’s vantage point the road to that legislation.

The dictionary definition of “welfare” is expansive and positive, connoting an activity – aiding those in need – which Americans historically have approached with empathy and enthusiasm. Yet in the late twentieth century, the definition of “welfare” narrowed in the public imagination to mean the Aid to Families with Dependent Children (AFDC) program, a public system of providing money to poor and unemployed women with children, a disproportionate ercentage of whom were people of color.

Established by the Social Security Act of 1935 as the first federal program of direct monetary assistance to poor families, AFDC sought to provide financial security for the most vulnerable Americans. Yet throughout its sixty-year history, national politicians used condemnation of “welfare” and welfare recipients as a powerful and racially-loaded rhetorical tool. By the 1990s, it had become clear to liberals and conservatives alike that the AFDC system had failed profoundly in its mission to keep single-parent families out of poverty. Poverty had become multigenerational, and so had AFDC dependence.

Arkansas Governor Bill Clinton first seized the national spotlight in 1988 through his advocacy of increased experimentation with alternative welfare approaches. Many of these initiatives involved instituting “workfare” – requirements that welfare recipients have a job, search for work, or participate in community service activities in order to keep receiving a welfare check. When Clinton ran for President in 1992, welfare reform became a major plank of his domestic agenda. The issue was central to his brand as a “New Democrat” — committed to centrist approaches on social policy and unwilling to tolerate a program that allowed poor people to have long-term dependence on government support. He promised to “end welfare as we know it” if elected, giving people “a hand up, not a hand out.” These words electrified campaign audiences and played particularly well to the independent swing voters that made up nearly a third of the electorate.

I joined the HHS staff in early 1993 after working as a campaign aide the year before, knowing little about welfare reform beyond this election-year sloganeering. I quickly learned that the new president had recruited an all-star team to turn his welfare reform commitments into reality. Prominent welfare scholars Mary Jo Bane and David Ellwood had been recruited from Harvard to lead the policymaking and program administration of a reformed welfare program. Antipoverty scholar Peter Edelman joined HHS as a counselor to the secretary. Highly experienced staff members from Capitol Hill now were managing the development of Clinton’s welfare reform legislation and ready to shepherd it through Congress.

For much of that year, while public attention focused on Clinton’s ultimately unsuccessful effort to reform the health care system, a team gathered at HHS for 7:30AM meetings to hash out legislation that would reform AFDC and turn many of the state-level experiments with workfare into national policy. Simultaneously, HHS began to field many more request for state waivers from governors who recognized the opportunity Clinton’s election posed for immediate reform.

As Clinton’s new appointees began to work through these requests and frame national legislation, the complexities and trade-offs involved started to become clear. The academics who had advocated for moderate forms of workfare in their scholarly publications were unnerved by calls from some of their new colleagues for more restrictive and hard-line approaches to welfare reform, including time limits and cutting off health and child care benefits. Meanwhile, governors who were frustrated by inefficient welfare bureaucracies and caseload costs pressured the Administration to allow them to enact welfare reform without waiting for Congress to act. The former governor in the White House tended to side with those wanting rapid, cost-effective, solutions.

By 1994, Republican conservatives had begun to regroup from their election defeat of two years before and focus their energies on winning Congressional seats in the mid-term elections. Republican Congressional leader Newt Gingrich crafted a unified platform for GOP candidates named “The Republican Contract with America.” Promising leaner, more efficient government, the Contract called for immediate enactment of a “Personal Responsibility Act” that would “discourage illegitimacy and teen pregnancy by prohibiting welfare to minor mothers and denying increased AFDC for additional children while on welfare, cut spending for welfare programs, and enact a tough two-years-and-out provision with work requirements to promote individual responsibility.” Gingrich’s message resonated with an electorate that considered the Democratic-led Congress corrupt and ineffective and that felt Clinton had delivered on few of his campaign promises. Republicans swept to victory in the fall of 1994, gaining control of Congress and winning gubernatorial and state legislative races across the country.

The Republican sweep pushed the welfare reform debate further to the right. New Speaker of the House, Gingrich invoked the pastoral orphanage of the 1939 Hollywood film Boys Town as an example of a positive alternative to the current system, although he quickly had to backtrack when observers on the right as well as the left reacted in horror to the idea that fixing welfare involved separating children from their parents. A shell-shocked and humbled Clinton Administration recognized that it no longer had control of the debate. State waiver requests proposing more sweeping welfare cuts and time limits won approval from the Administration, often despite strong objections from Clinton’s HHS appointees.

By 1996, Clinton was running for reelection and comprehensive welfare reform legislation was moving through in Congress. Named the “Personal Responsibility and Work Opportunity Act,” the bill truly ended welfare as we knew it. Although Gingrich’s orphanages were nowhere to be seen, the legislation ended the welfare entitlement, a heretofore sixty-year federal guarantee that all poor people who qualified would receive the benefit. It instituted work requirements and limited the number of years parents could receive welfare over their lifetimes. AFDC would be replaced by a program termed Temporary Assistance to Needy Families (TANF).

As the legislation was debated on Capitol Hill, the simmering tensions between the welfare experts Clinton had appointed to HHS and the political veterans on the White House staff exploded into public view. HHS Secretary Donna Shalala pleaded with Clinton not to sign the bill into law, warning of cataclysmic effects if the millions of poor families on the welfare rolls were cut off by time limits and work requirements. White House advisors, on the other hand, urged the president to sign and ensure his 1992 campaign promise was fulfilled by Election Day. Clinton was a political pragmatist, but he also truly believed in the necessity of fundamental reform of the system. A child of a single working mother, Clinton understood the daily struggles faced by families on welfare better than many of his Washington counterparts. Although not everything in the bill was what he might have desired, he believed it was a better alternative than the status quo.

President Clinton signed welfare reform into law on August 22, 1996. Soon thereafter, Mary Jo Bane and Peter Edelman announced that they were resigning their HHS positions in protest of the new welfare law. David Ellwood had already left the Administration in frustration. Having spent two years working on other urban issues at the White House, I returned to HHS six months after TANF became a reality. Some of the same group of us who had sat down to write welfare legislation three years before now turned to the task of writing regulations that would be true to the lawmakers’ intent while providing safeguards for vulnerable populations. Freed from political pressure to restrict and limit welfare benefits, staffers (of both parties) tried to knit together the frayed remainders of the social safety net.

Yet the worst fears about welfare reform’s adverse impact did not come to pass – at least not at first. A booming national economy meant that fewer families needed to resort to welfare in the first place, and women coming off the welfare rolls had more job opportunities than usual. Conservatives hailed the large numbers of people moving from welfare to work as evidence that the tough-love approach of TANF was effective.

Yet poor families headed by single parents continued to struggle to make ends meet, and now had to navigate an employment market where jobs were often located in areas far from their neighborhoods and ill-served by public transportation. They had to find reliable and safe child care, adequate health care, and affordable housing. The modern American economy was a particularly challenging place for women of color who had a high school education or less. Many found work, but this work was transient, low-paying, and often part-time.

The systemic inequalities that necessitated AFDC’s creation have not disappeared. Welfare has been reformed, but the poverty it sought to remedy remains with us.