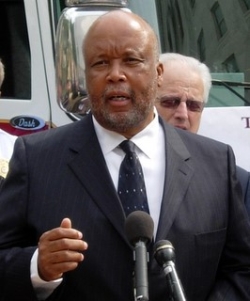 Bennie G. Thompson, United States Representative from Mississippi’s Second Congressional District, is the chair of the House Homeland Security Committee and as such is one of the most influential African American members of Congress.

Thompson was born in Bolton, Mississippi on January 28, 1948 to Will Thompson, an auto mechanic, and Annie Lauris Thompson, a teacher.   He earned a BA in political science from Tougaloo College in 1968, and then earned MS and MA degrees from Jackson State University in 1972.  He worked for one year as a school teacher in Madison, Mississippi after graduating from Tougaloo.

Thompson became interested in politics while a student at Tougaloo College where he spent time as a grassroots campaigner and voter registrar.  Soon after graduating in 1968, he successfully ran for alderman of his hometown of Bolton and now is the longest-serving African American elected official in Mississippi.  In 1973, he was elected mayor of Bolton.  During his tenure as mayor, he commissioned a property reassessment effort that uncovered deliberate devaluation of property owned by the city’s white officials to avoid higher taxes.  In 1980 he was elected to the Hinds County Board of Supervisors, and in 1993 he successfully ran for Congress, winning the open seat in the Second District after Congressman Mike Espy vacated it to become Secretary of Agriculture in the William Clinton Administration.  Thompson defeated Henry Espy, brother of the former congressman, and James Meredith, a noted civil rights activist.

As a liberal Democrat, Thompson strives to be a voice for the poor and disadvantaged and is a leading voice on issues relating to civil rights, education, and healthcare reform.  In 1975 he filed a lawsuit to increase funding at Mississippi’s historically black universities.  The suit finally was settled in 2004 for $503 million after the U.S. Supreme Court refused to hear an appeals case.  In 1998, he protested discriminatory hiring practices of the Mississippi Department of Wildlife, Fisheries, and Parks.  And in 2000, his legislation created the National Center for Minority Health and Health Care Disparities law.  As a representative, he has served on the Agriculture, Small Business, and Budget Committees before assuming the top Democratic position on the Committee on Homeland Security in 2005.  He now serves as the committee’s chairman.

Thompson is married to London Johnson, a public schoolteacher.  They have one daughter, BendaLonne.