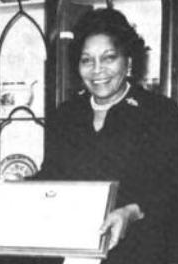 Barbara M. Watson, businesswoman, lawyer, government executive, and diplomat, was born in New York City, New York on November 5, 1918. She was the daughter of James S. Watson, the first black judge elected in New York State, and his wife, Violet Lopez Watson, one of the founders of the National Council of Negro Women. Barbara M. Watson was the sister of James Lopez Watson and the cousin of General Colin L. Powell, the former U.S. Secretary of State.

After graduating from Barnard College in 1943, she took a job as an interviewer for the United Seamen’s Service. In 1946, she founded a modeling agency and charm school, Barbara Watson Models, serving as the agency’s executive director until 1956.

Watson served as coordinator of Student Activities at Hampton Institute. Upon graduation from New York Law School in 1962 she worked as an attorney with three New York City government agencies; the Board of Statutory Consolidation of the City of New York, the Office of the Corporation Counsel of the City of New York, and as director of the New York City Commission to the United Nations.

In July 1968, President of the United States Lyndon Johnson nominated Watson as Assistant Secretary of State for Security and Consular Affairs.  The U.S. Senate confirmed her appointment.  She held this office from August 1968 until November 1974 when she resigned from the post. The Nixon Administration had sought earlier to replace Miss Watson, a Democrat, with a Republican appointee.

At the beginning of 1975, Watson took a job with Walter Annenberg’s Triangle Publications as a legal consultant. She also lectured at several colleges and universities.

In January 1977, President Jimmy Carter asked Watson to return to the State Department as Assistant Secretary of State for Consular Affairs.  Her second stint in this office lasted from April 13, 1977 until August 17, 1980. President Carter then appointed Ms. Watson United States Ambassador to Malaysia; she presented her credentials on September 25, 1980 and held this post until March 1, 1981.

Watson died February 18, 1983 in Washington, D.C. at the age of 64. Secretary of State George P. Shultz said in a statement that the department was ”deeply saddened” by her death. He added that she was a ”public servant of unusual dedication and distinction.” Miss Watson is survived by two brothers, James and Douglas, both of New York, and a sister, Grace, of Washington.