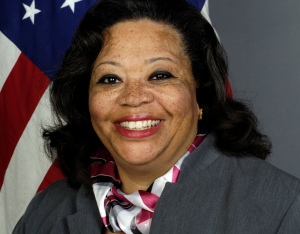 Susan Page is the first U.S. Ambassador to the newly formed nation of South Sudan.  She was nominated by President Barack Obama on August 18 and confirmed October 18, 2011.  Page arrived in the capital city of Juba on December 6, 2011.

Page graduated in 1982 from Homewood-Flossmoor High School in Flossmoor, Illinois, a Chicago suburb.  She received an A.B. in English with high distinction from the University of Michigan in 1986 and a J. D. from Harvard Law School in 1990.  She also studied at St. Andrews University in Scotland and conducted research on children and women’s rights in Nepal through a Rotary International post-graduate fellowship.

After working briefly as a lawyer in private practice, Page began her career at the State Department in 1991, working on arms deals as an attorney-adviser for politico-military affairs in the Office of the Legal Adviser.  Beginning in 1993 she served as a Foreign Service Officer.

Prior to her appointment as ambassador to South Sudan, Page spent several years working on negotiations for that nation’s secession from Sudan. Previously she was the Deputy Assistant Secretary for African Affairs at the U.S. State Department, principally covering central and southern Africa.  She has lived and worked throughout sub-Saharan Africa serving as a political officer, legal advisor, and diplomat with the U.S. State Department, U.S. Agency for International Development (USAID), and the United Nations. She has testified before congressional committees, served on numerous panels, and been interviewed by media outlets such as BBC (TV), Radio France International, National Public Radio (NPR), and Voice of America (VOA) on a wide range of African issues.  She is a fluent French speaker and the recipient of several State Department honors, including a commendation for outstanding service to the Sudan Peace Process.

From 2002 to 2005 Page was Regional Director for Southern and East Africa at the National Democratic Institute for International Affairs (NDI). Before that she headed the Justice and Human Rights Unit of the United Nations Development Program (UNDP) in Rwanda.  Earlier in Kigali, Ms. Page spent two years as the political officer at the U.S. Embassy where she served as the primary political officer in Rwanda monitoring and reporting on issues related to the war in the eastern part of the Democratic Republic of Congo. She was also the key contact between the Embassy and the Rwandan-backed rebels, RCD-Goma, and monitored the operations of the International Criminal Tribunal for Rwanda (ICTR). She also drafted the 1999 and 2000 U.S. State Department Human Rights Report for Rwanda, and analyzed Rwandan laws on the establishment of gacaca, a form of community based participatory justice modified to try genocide suspects.

From 1993 to 1998, Page was assigned by the U.S. State Department to USAID regional offices in Kenya and Botswana where she spent five years as a Regional Legal Adviser working on a variety of international legal matters in east and southern Africa.

Page is married to Damien Coulibaly; they have one son.