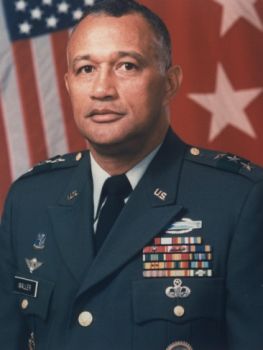 Calvin Augustine Hoffman Waller was a United States Army officer who rose to prominence as the Deputy Commander-in-Chief for military operations with United States Central Command (Forward), during the Persian Gulf War (1990-1991).  He became at that time one of the highest-ranking African American officers in the U.S. military.

Lt. General Waller was born on December 17, 1937 in Baton Rouge, Louisiana.  He attended both Shippensburg State College then Prairie View A&M University in Texas.  After graduating in 1959, Waller enlisted in the United States Army and served for 32 years.  He served in the Vietnam War for one year as a junior officer and later commanded the Eighth Infantry Division in Germany during the 1980s.  His career also included a variety of staff assignments and commanding posts during his career.  He also earned numerous awards and decorations including: the Defense Distinguished Service Medal, the Army Distinguished Service Medal (two awards), the Defense Superior Service Medal, Bronze Star (with Oak Leaf Cluster), the Meritorious Service Medal (with three Oak Leaf Clusters), the Air Medal, the Army Commendation Medal, Combat Infantryman’s Badge, and the Master Parachutist Badge.

As General Norman H. Schwarzkopf’s deputy during the Persian Gulf War, he proved to be vital to the victory even as his commanding officers, Schwarzkopf and U.S. Army Chief of Staff General Colin Powell, received most of the publicity.  He had the courage to admit shortcomings within the U.S. military at the time of the conflict.  He stated publicly, for example, that the United States was short troops in the Persian Gulf region when the war began.  Likewise, after the war, he officially endorsed Bill Clinton’s presidential campaign as a subtle sign of disapproval with the George H.W. Bush administration’s approach to the conflict.

Lt. General Waller’s last assignment was as Commanding General, I Corps at Fort Lewis, Washington. He retired on November 30, 1991 at the relatively young age of 53 shortly after the Persian Gulf War ended.  It was widely speculated that his abrupt retirement was a sign of his disillusionment with the high command during the Gulf War.

After his retirement, Waller served as the President and CEO of RKK Limited, a Denver, Colorado-based environmental technology company.  He was later Senior Vice President for the Department of Energy Programs for the ICF Kaiser Environmental and Energy Group.  In July 1995, he joined the environmental contractor, Kaiser-Hill.

Lt. General Waller also earned many civic awards including the Martin Luther King, Jr. “Buffalo Soldier” Award from the Congress of Racial Equality, the Roy Wilkins Renown Service Award from the NAACP, the French Legion of Honor Award from the Government of France, and the “Star of Texas” award from the state of Texas.

On May 9, 1996, Lt. General Waller passed away in Washington, D.C. due to complications from a heart attack.  Waller is survived by his wife of 37 years, Marion Waller, and sons Michael and Mark.