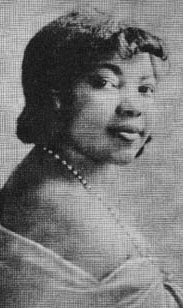 Beulah “Sippie” Thomas Wallace sang and recorded her best work for Okeh Records between 1923 and 1927 when she was the most frequently recorded female blues singer in the country. Not only did she have a unique style and sound, Wallace wrote many of her songs, sometimes collaborating with her musical partners and brothers George and Hersal. Additionally, she played the piano. The Depression ended Sippie’s blues career but her move to Detroit in 1929 took her from being the best blues singer to leading a gospel choir. In 1966, although she had not performed blues for over four decades, she launched a comeback. By 1970, she had recorded an album,” Sippie Wallace and Victoria Spivey.” Her award-winning album Sippie, recorded in the 1970s with Atlantic Records, was made possible by a friendship with Bonnie Raitt. It was nominated for a Grammy in 1983 and won a W.C. Handy Award for best blues album in 1984.

Sippie Wallace was born on November 1, 1898 in Houston, Texas, at a time when the area was developing a blues identity. She started singing in her father’s church and then along with her brothers appeared on the Texas club circuit and in tent shows. Thinking that opportunities might be better in other cities, the siblings moved to New Orleans in 1915 and in 1923 Sippie followed her brothers to Chicago. She had married Matt Wallace in 1917. As she enjoyed her earlier stardom, her beloved brother Hersal died from food poisoning in 1926. Ten years later, while singing and playing piano at Leland Baptist Church in Detroit, her brother George and her husband passed away. George had become a music publisher, songwriter, and orchestra leader in Chicago.

“The Texas Nightingale” performed with many of the greats – King Oliver, Louis Armstrong, Clarence Williams, Victoria Spivey, and Bonnie Raitt. Her powerful delivery of the blues was raucous, brash, and sharp-edged with risqué lyrics that gave her a sound different from others in both eras of her blues career.