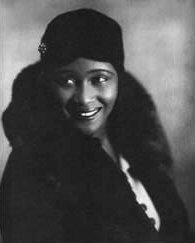 Victoria Spivey grew up in a musical family where her father, Grant, played in a string band while sisters, Addie and Elton, sang the blues. But it was Victoria who became the star with a beginning that took her moaning style of singing into honky tonks, bordellos, men’s clubs and gin mills all over Texas. In 1926, she left for St. Louis and acquired a recording contract with OKeh records but found her stride in New York where she continued to record but performed in all the elite nightclubs, appeared in the musical, Hellzapoppin’ Revue, took a lead role in Hallelujah, the first musical feature film with an all black cast, and sang with the big bands in the 1940s. The crossover into the big band jazz genre allowed her to join Duke Ellington, Count Basie, Louis Armstrong, and Benny Goodman on stages across the country. As the country’s musical tastes changed in the 1950s, she became an organist and choir master in her church and then in the 1960s she enjoyed a revival of her blues career.

Spivey was born in Houston, Texas, in 1906 but made New York her home. She was attractive, classy, tall, and well educated for singers of her day. She carried all these attributes into the show business world where she not only became a noted singer but also a competent songwriter and savvy businesswomen. During her 1960s comeback, she formed her own record company and signed such artists as Sippie Wallace (who she urged out of retirement), Hannah Sylvester, Luther Johnson, and the young Bob Dylan.

Spivey believed that, “The blues is life and life is the blues.” Her signature songs included “Black Snake Blues,” “Dirty Tee Bee Blues,” “Detroit Moan,” and “Dope Head Blues.” She stamped each song with her moaning sound and uniquely sexy, tantalizing delivery.