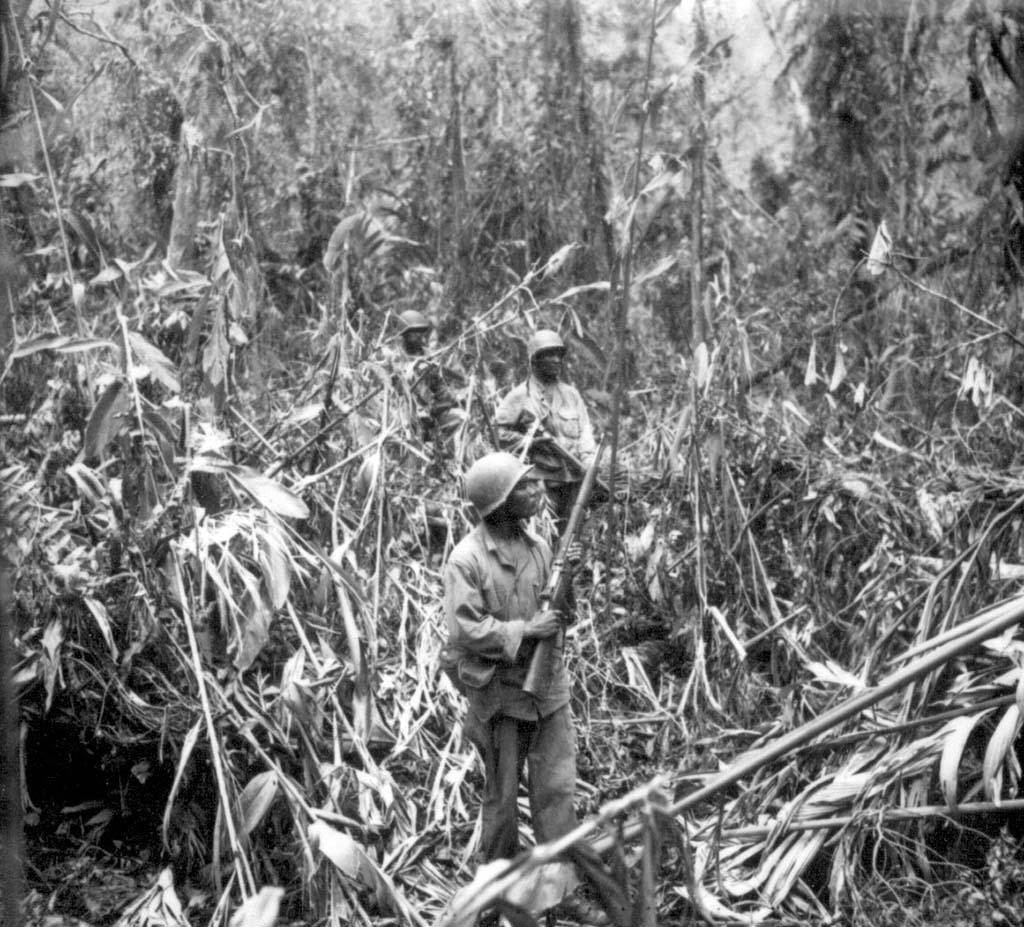 Activated on May 15, 1942, at Fort Huachuca, Arizona, the U.S. Ninety-third Infantry Division was the first segregated division-size infantry unit mobilized during the Second World War.  Composed of White general staff officers and African American junior officers and enlisted men, the Ninety-third was made up of the draftee 369th and the veteran 368th and the 25th Infantry Regiments along with an assortment of field battalions and companies.

After its formation, the division conducted its basic training at Fort Huachuca, before heading to Louisiana during the spring of 1943 where the unit staged field operations against the Eighty-fifth Infantry Division during the Third Army Maneuvers.  In late 1943, the Ninety-third moved westward to California where the unit went through desert training exercises before departing from the United States for the South Pacific Theater of Operations in January, 1944.

After being placed under the command of the Fourteenth Corps, the Ninety-third division was largely deployed in combat support positions throughout the theater, relieving companies and regiments of the Americal Division and the all-white Thirty-seventh Infantry Division on Guadalcanal, Bougainville, New Georgia, and Green Islands in what are now the Solomon Islands, and Bougainville Island which is part of New Guinea.

While in the area, senior army commanders heavily criticized the division and Washington officials after one of its companies allegedly became disoriented after encountering heavy enemy fire during a routine combat mission on Bougainville Island in April of 1944.  Although an inspector general’s investigation of the incident had cleared the troops of misconduct, rumors surrounding the incident followed the unit as it moved throughout the Pacific area during the war.

During the summer of 1944, elements of the Ninety-third passed through the Southwest Pacific Theater of Operations, relieving the Forty-first and Thirty-first Infantry divisions stationed on New Guinea, Treasury, Los Negros, and Morotai Islands of base security and service support duties as they advanced towards the Philippines islands and Japan.  While serving on Morotai Island, division troops engaged in subduing and capturing Japanese forces stationed in the area.  There, division patrols earned the distinction of capturing Colonel Muisu Ouichi, the highest-ranking Japanese prisoner of war in the Pacific war. Upon arriving in Mindanao and Leyte of the Philippines at the end of 1945, the men of the division boarded troop transport ships heading for the United States.  The 93rd Infantry was deactivated at Camp Stoneman, California, on February 3, 1946.