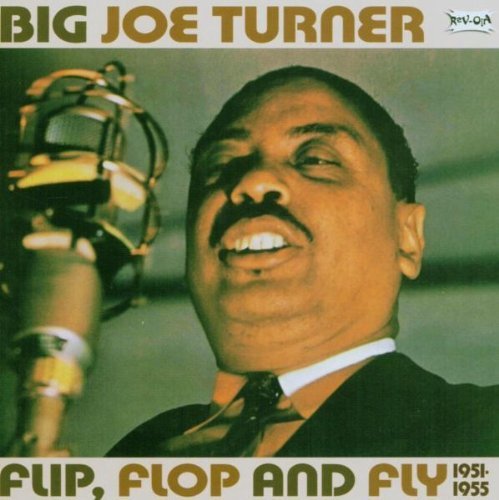 Big Joe Turner, known by many as the “Boss of the Blues,” was born Joseph Vernon in Kansas City, Missouri, on May 18, 1911. Turner is considered a major contributor to the development of the sound of Kansas City Jazz, and the early development of Rock n’ Roll. Drawing from Blues music vocal traditions, Turner’s style earned him the nickname of a “Blues Shouter,” with his resonant voice enabling him to cross over into Jazz, Rock n’ Roll and Rhythm & Blues.

Turner and his musical partner, pianist Pete Johnson, were discovered by record producer John Hammond at the Sunset Café in Kansas City in 1936. Later that same year, Hammond brought Turner and Johnson to New York, where they played for several months at the nightclub, The Famous Door. In 1938, Turner and Johnson returned to New York and were part of Hammond’s first “Spirituals to Swing” concert. The duo was well-received by the public, and in late 1938 Turner and Johnson made their first recordings, “Roll ‘Em Pete” and “Goin’ Away Blues” for Vocalion Studios.

By 1939, Turner and Johnson, again with Hammond’s connections, were invited to play at New York night club, Café Society. This led Turner and Johnson to record “Piney Brown Blues” for the Decca label in 1940, selling over 400,000 copies. Following this new-found popular success, Turner moved to Hollywood, California in 1941, and worked as part of Duke Ellington’s “Jump for Joy” Revue, touring up and down the West coast until 1945.

National Records signed Turner and Johnson in 1944, and the duo recorded the hit “Johnson and Turner Blues,” which earned Joe Turner the Silver Award from Esquire Magazine as Best Male Vocalist in an All-American Jazz Band. After this hit, Turner’s popularity waned until he was asked to step in as a substitute vocalist when Jimmy Rushing left the Count Basie Band in 1951. Ahmet Ertegun of Atlantic Records heard Turner sing with Count Basie at the Apollo Theater in 1951 and signed him to a one-year contract. Turner recorded for Atlantic Records until 1960.

In 1965, Turner was voted as Best Male Singer by Melody Maker magazine and Best Blues Record by Jazz Journal in the United Kingdom. During the 1970s, Turner recorded with Black and Blue, Trojan Records, LMI, and Spivey. He toured again with The Count Basie Orchestra, appeared in the documentary film about Kansas City Jazz, The Last Of The Blue Devils, and recorded for the Quincy Jones film soundtrack Roots in 1977.