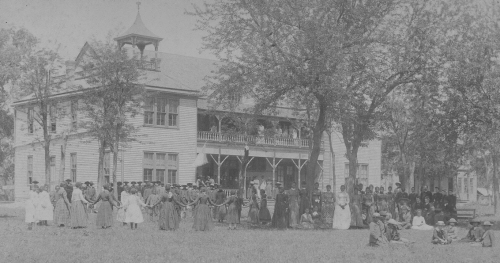 Tullahassee Manual Labor School was a boarding school for Creek freedmen funded by the Creek Nation in the Indian Territory. The Tullahassee school was originally founded in 1850 as the first of three boarding schools for the education of Creek children by the Creek Nation. The school was located at the confluence of the Arkansas and Verdigris Rivers on the northeastern edge of Creek Nation and served as the premier educational institution among the Creeks for many years. In December 1880 the three-story brick school building was mostly destroyed in a fire. The Creek Council used the opportunity to relocate the Indian boarding school to a new location and offered the burned-out building and the 100 improved acres surrounding the building to the African Creeks for use as a boarding school. The Council also provided funds to re-build the school, and with the cooperation of Baptist Home Mission Society reopened the school in 1883 as the Tullahassee Manual Labor School.

For many years Tullahassee was the only school in the Indian Territory to offer schooling beyond the elementary grades for Indian freedmen. The acreage around the school was expanded over the years to include 300 acres of orchards and cultivated fields and the school building itself was expanded in the late 1880s and early 1890s to accommodate 150 students. Tullahassee was the only freedman boarding school to remain open after tribal dissolution in 1906 and was operated by the Interior Department until 1914 when it was sold to Waggoner County and continued as a school for African American Oklahomans until 1924.