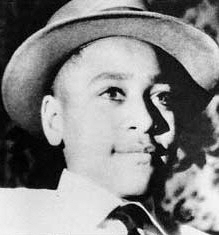 Emmett Till, Christmas 1954
Photo by Mamie Till Bradley, Fair use image

Emmett Till was a fourteen year-old African American boy who was tortured and killed in Money, Mississippi in 1955 after allegedly insulting a white woman.  Born in Chicago, Illinois, Till lived with his mother, Mamie Till. His father, Louis Till, died while serving in the U.S. Army in Italy in 1945. In the summer of 1955, Till went to visit with his 64-year-old great-uncle Mose Wright and family. Before leaving home, Till’s mother instructed him to follow Southern customs and mind his manners, but having grown up in a Northern city like Chicago, Till was unaware of the legacy of lynching and the rigid social caste system in the South.

On August 24, 1955, while at a local grocery store with his cousins, Till reportedly left the store whistling at the white female clerk, Carolyn Bryant. Soon after the incident, Roy Bryant, the clerk’s 24-year-old husband, and his half-brother, J.W. Milam, appeared at Mose Wright’s cabin around 2:30 a.m. The armed men kidnapped Till, slashed out one of his eyes, and tied a 100-pound cotton gin fan around his neck with barbed wire. Till was severely beaten, shot in the head, and thrown into the Tallahatchie River. Two fishermen found Till’s mutilated and unrecognizable corpse three days later.  Mamie Till-Bradley (In 1951 Till briefly married “Pink” Bradley in Detroit, Michigan) immediately requested her son’s bloated, mutilated body be returned to Chicago and displayed in an open casket funeral at Roberts Temple Church of God in Christ. She proclaimed, “I wanted the world to see what they did to my son.” Tens of thousands of people lined up to view the body at the mortuary and over 50,000 mourners attended the funeral services days later.

Till’s murder symbolized for many African Americans the inherent racism and disparity of justice they continued to face in the aftermath of World War II. Because of the media and particularly the coverage by the African American press, the murder gained national and international attention that prompted public discourse on segregation, racial violence, and social, political, and economic equality.

In September, Mamie Till-Bradley came to Mississippi for the trial under heavy protection from advisors and relatives. A number of prominent outside observers attended as well including Michigan Congressman Charles Diggs, Jr.  Till-Bradley and Mose Wright testified in court, but soon had to leave afterwards for fear of their lives. To discredit the powerful testimony of a black grieving mother, the defense argued that Mamie Till-Bradley took out an insurance policy on her son and sent him to Mississippi to be killed and that the body found was a cadaver planted by the NAACP.  Historically no jury in the State of Mississippi had ever convicted a white person for killing a black person if the crime involved sexual aggressions towards a white woman. The all-white, male jury deliberated for only sixty-seven minutes before acquitting the two men. Four months later, Bryant and Milam admitted to the murder to journalist William Bradford Huie for an article that appeared in Look magazine. They received $4,000 for their interview.  Many grassroots and local activists, thereafter, saw Till’s murder and trial as a call to action that helped galvanize the Modern Civil Rights Movement.

Emmett Till was buried on September 6, 1955 at Burr Oak Cemetery in Alsip, Illinois. His mother continued to seek justice and educate the world of her son’s murder and the proceedings of the trial until her death in 2003.

“The Murder of Emmett Till,” The American Experience, pbs.org; Ruth
Feldstein, “I Wanted the Whole World to See’: Race, Gender, and
Constructions of Motherhood in the Death of Emmett Till” in Not June
Cleaver: Women and Gender in Postwar America, 1945-1960, Joanne Jay
Meyerowitz, ed., (Philadelphia: Temple University Press, 1994); Mamie
Till Bradley, “Speech given at Bethel A.M.E. Church, Baltimore,
Maryland, Oct. 29, 1955,” in Women and the Civil Rights Movement,
1954-1965, eds., Davis W. Houck and David E. Dixon, (Oxford: University
Press of Mississippi, 2009).