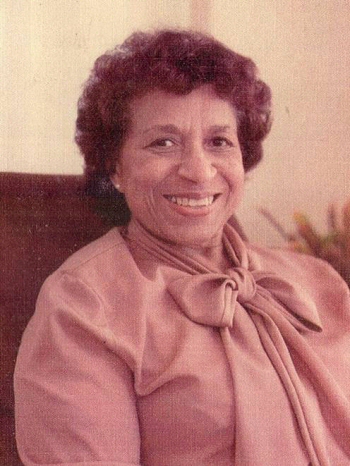 Constance Allen Pitter Thomas, the eldest of the Pitter Sisters, was born July 13, 1917, to Edward A. Pitter and Marjorie Allen Pitter, in the East Madison Street district of Seattle, Washington.  She grew up in a very close-knit family and community, in which she received emotional, religious, social, civic and political support that provided her with a firm foundation to succeed in life.  Pitter attended Seattle Public Schools and entered the University of Washington immediately following graduation from Garfield High School.

Constance Pitter attended the University during the Great Depression. This period proved very difficult economically for Constance and the Pitter family, especially with three daughters attending college during the same time span.  Nonetheless, she and her siblings managed to remain at the university, with the help of her nuclear and extended family, which included her church, sorority, and community.

Pitter was motivated to attend college at a very young age.  Her family expected it of her and her sisters for four major reasons: 1) economic independence; 2) social mobility; 3) professional service to the black community; and 4) elevation of the black community.  Highly motivated to study theater arts, she enrolled in the Speech and Drama Department as an undergraduate in 1935 and received a degree in 1941.

Pitter went to New York where she joined the American Negro Theatre, winning the “Most Promising Actress of 1941” award.  However, she decided not to pursue a theatrical career and returned to Seattle where she became a substitute teacher for the Seattle Public Schools for eleven years.  Eventually, she received a permanent contract from the school district as a speech therapist and instructor of youth with disabilities. Constance Pitter married Gordon H. Thomas in 1948.  They had one son, Kenneth.   Mrs. Thomas retired from the Seattle Public Schools District in 1970.  She died in Seattle in 2006.