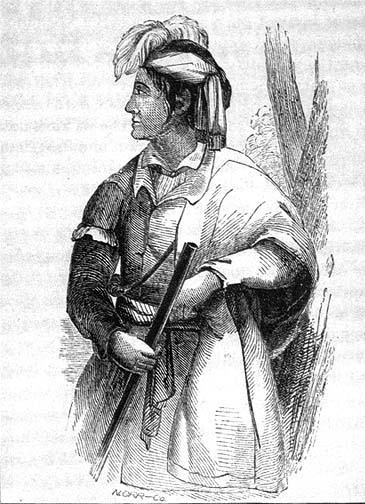 Coacoochee (Ko AH koo chee), known to Americans as Wild Cat and to Mexicans as Gato del Monte, is best known as a Seminole resistance leader during the American invasion of Seminole lands in Florida in the 1830s.  He led a celebrated escape from a U.S. prison at Fort Marion in St. Augustine, Florida, in November 1837.  In his company was John Cowaya (John Horse), leader of a community of maroons (free Africans), who remained his close associate throughout Coacoochee’s career.  Coacoochee belonged to the elite lineage of Seminoles and became micco (leader) of his own community during the Second Seminole War.  He occupied a series of offices in the Seminole government during the war, the forced relocation of Seminoles to an area now in Oklahoma, and the initial period of adjustment in the West.

Despite an extraordinary talent for leadership, Coacoochee was passed over for the position of Seminole Micco, the top Seminole governmental position.  Frustrated with his situation and with Muscogee (“Creek”) and American interference in Seminole affairs, he moved his community to Mexico in 1849 and 1850.  John Cowaya’s community of maroons accompanied them, and a community of Kickapoos joined them briefly.  Leaders of the three communities negotiated a treaty with Mexico, agreeing to defend the Mexican border country in exchange for land, goods, and services.  Seminoles served Mexico with distinction until the death of Coacoochee, and many of his people, in a smallpox epidemic in 1857, and the subsequent departure of Seminoles from Mexico in 1859 and 1861.