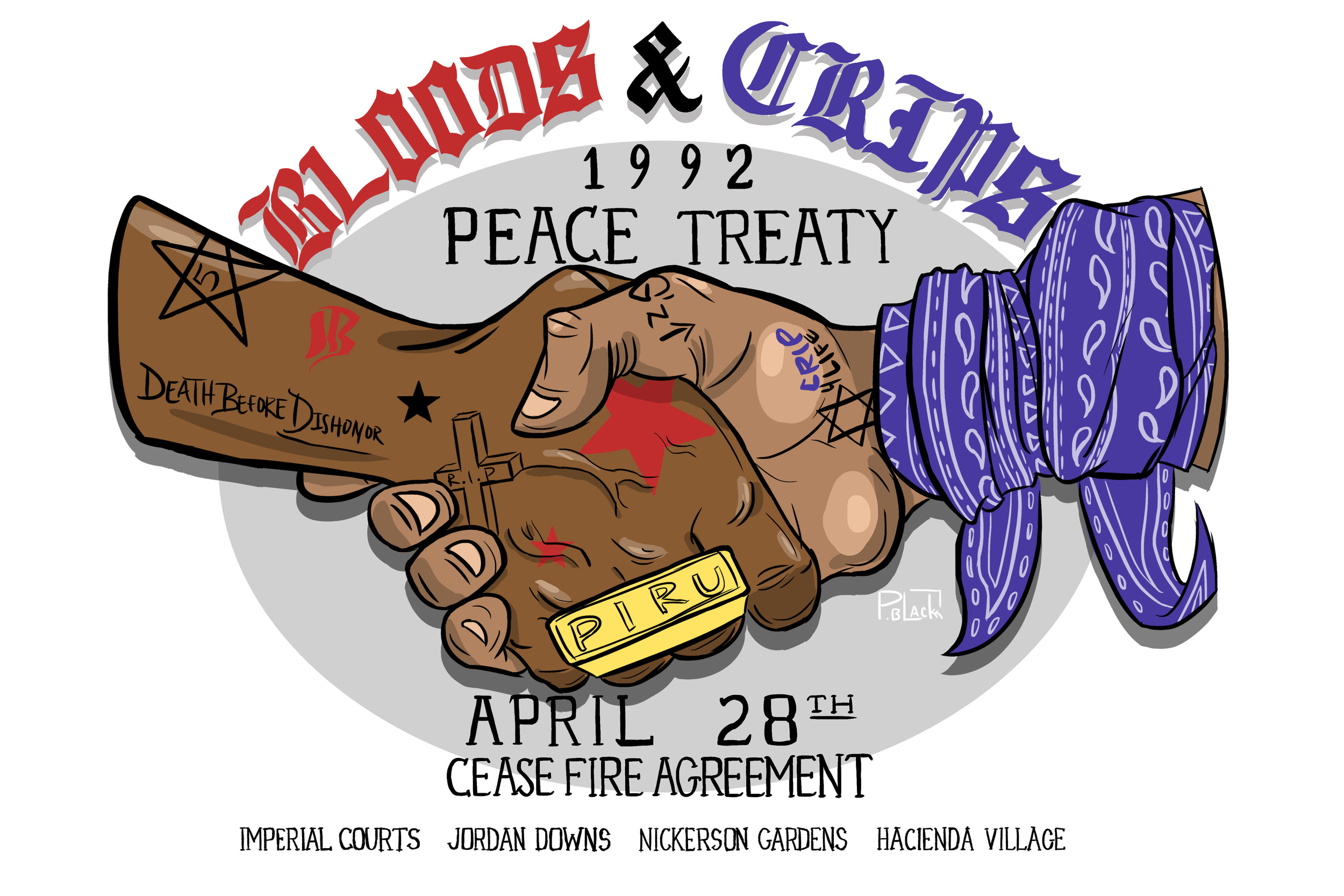 The Watts Truce was a peace agreement among rival Blood and Crips street gangs in Los Angeles, California, mainly in the neighborhood of Watts. The Watts Truce occurred days before the Rodney King Riots. This truce was a significant factor in the decline of street violence in Los Angeles after the 1990s. In the late 1960s, the Crips Street Gang was founded by Raymond Lee Washington and Stanley Tookie Williams. As the Crips’ influence grew in Los Angeles in the early 1970s, several independent gangs, including the Brims, Pirus, Bishops, Bounty Hunters, Athens Park Gang, and Denver Lanes, created a coalition to fight back against them. That coalition became the Bloods.

Both groups recruited members heavily in South Central Los Angeles, Watts, and in neighboring Compton. As both gangs grew into thousands of members, the war between the two gangs intensified, going from fist fighting to using guns during gang feuds. The introduction of crack cocaine and the gangs’ access to high-power weapons in the 1980s intensified the conflict. By the late 1980s, the two gangs had a combined membership of more than 50,000 or more making them by far the largest street gangs in the history of the United States.

In 1988, the first attempt to make peace between the gangs occurred after the death of Karen Toshima, a 28-year-old Japanese American woman in the city’s Westwood neighborhood near the UCLA campus. A peace summit was organized by Rev. Charles Mims Jr in South Los Angeles to broker a truce. Despite this effort, the peace summit failed to end the violence among the rival gangs. In 1989, Nation of Islam leader Louis Abdul Farrakhan came to Los Angeles and made his “Stop the Killing” speech aimed to curtail gang killings. A year later, he returned to Los Angeles and made a second speech at the Los Angeles Memorial Sports Arena, where hundreds of Bloods and Crips members were in attendance, but the intergang violence continued.

In April 1992, Blood and Crip gangs from the Watts neighborhood finally came together to negotiate a peace. Four gangs had significant involvement in the truce. The Bounty Hunters Bloods from the Nickerson Gardens Housing Projects, Grape Street Watts Crips from the Jordan Downs Housing Projects, Hacienda Village Bloods from the Hacienda Village Projects, and PJ Watts Crips from the Imperial Courts Housing Projects. On April 28, 1992, a peace treaty was established among the gangs. The rival gangs vowed to challenge police brutality and reduce violence in their communities. The peace treaty, which was signed at a Muslim Mosque in Watts, was modeled after the 1949 Armistice Agreement between Israel and Egypt to end official hostilities in the 1948 Arab-Israel War.

One day later, the Rodney King Riots erupted in Los Angeles and overshadowed the Watts Truce. After the Riots, other Blood and Crip gangs declared themselves at peace. In 1993, Richard “Tweedy Bird Loc” Johnson and Ron “Ronnie Ron” Phillps produced a hip hop studio album, Bangin on Wax by Bloods and Crips. The album features the singles “Piru Love,” “Steady Dippin,” and “Bangin on Wax.” Bangin on Wax sold over 500,000 units and was certified gold. Even though violence would continue among the gangs in Los Angeles, the Watts Truce was nonetheless credited as a significant factor in the decline of street violence in Los Angeles in the coming decades.

Multimedia relating to The Watts Truce (1992)