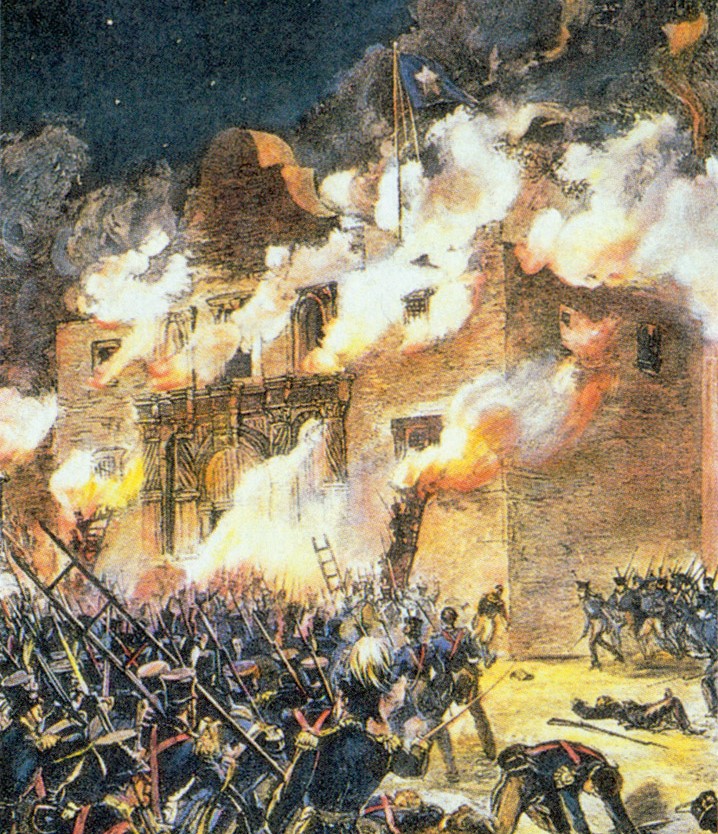 As American settlers moved westward in the mid 19tth century they encountered the vast Mexican territory of Texas y Coahuila. Sparsely populated with fertile land, this Mexican territory was attractive to American land speculators, southern plantation owners, and slave traders. Landowners could cultivate cotton, rice, sugar, and other cash crops while land investors could sell their appreciating investments and slave traders would have a new market. Mexico welcomed settlement in the sparsely settled region to develop, pacify and fortify the vast area and ironically to strengthen its claim against possible expansion from the United States.

Texas was particularly attractive to settlers from the American south. These settlers were slave owners, who wanted to replicate the economic, social, and political systems of the south in Texas. Although the Mexican constitution of 1829 banned slavery, exceptions were made for American settlers in Texas. The Mexican government skirted the ban by defining black workers not as slaves but rather as “indentured servants for life.”

Beginning in 1822, Missouri emigrant Stephen Austin received large land grants from the Mexican government.  Austin then offered parcels of land to cotton growers from the American south. For each slave brought to Texas, 50 acres of land (later increased to 80) was offered to each planter. Within a decade an English-speaking slave region had been created within the boundaries of Mexico. By 1835, 14% of the English speakers, approximately 5,000 were enslaved. The Alamo church (later to become famous in Texan history) was used as a slave market.

By the mid-1830s the Mexican government grew suspicious of the growing number of English-speaking American settlers and their slaves residing in Texas and began restricting emigration from the United States. Many Mexicans (and Black slaves) wanted slavery to be abolished in Texas as it was in the other parts of Mexico. American settlers often held racist views toward Mexicans and resented being governed by brown, Spanish speaking, Catholics.

Conventions held by the Texas colonists in 1832 and 1833 resulted in resolutions petitioning the Mexican government for the establishment of a Texas state separate from Coahuila and for the repeal of the new law preventing Anglo-American immigration into Texas. By 1835 fighting broke out between Mexican forces and American colonists. The Republic of Texas declared its independence from Mexico on March 2, 1836, and was recognized by United States the following year. 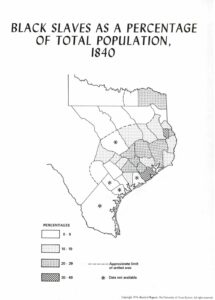 Once the fighting broke out many slaves fled north, west, or south to freedom. Others joined the Mexican army. To many of the 5,000 enslaved people, the Mexican army brought liberation. About 150 Blacks supported the Texas revolution and independence. Some were promised land, others held grievances against Mexico, and some had personal reasons for supporting Texan independence.  Samuel McCullough, Jr. a Black man, was the first rebel to shed blood for an independent Texas.  Joseph Travis, the bondservant of Col. William Travis, one of the co-commanders at the Alamo, was one of the few survivors of that battle.

Once Texas became independent, the new constitution written in 1836 endorsed slavery and opposed rights for people of color or women. Citizenship was open to all except Africans, descendants of Africans, and Indians. That constitution also made it illegal for slave owners to emancipate their slaves and stated that no person could be prevented from bringing slaves into Texas. 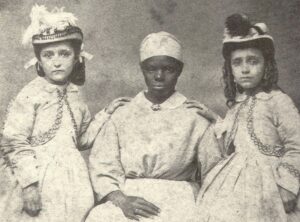 The Republic of Texas ceased to exist when Texas joined the United States as the 28th state on December 29, 1845. Once Texas was admitted as a slave state, the enslaved population grew rapidly. Twenty years later, at the end of the American Civil War on June 19, 1865, 250,000 enslaved people were finally emancipated in Texas.