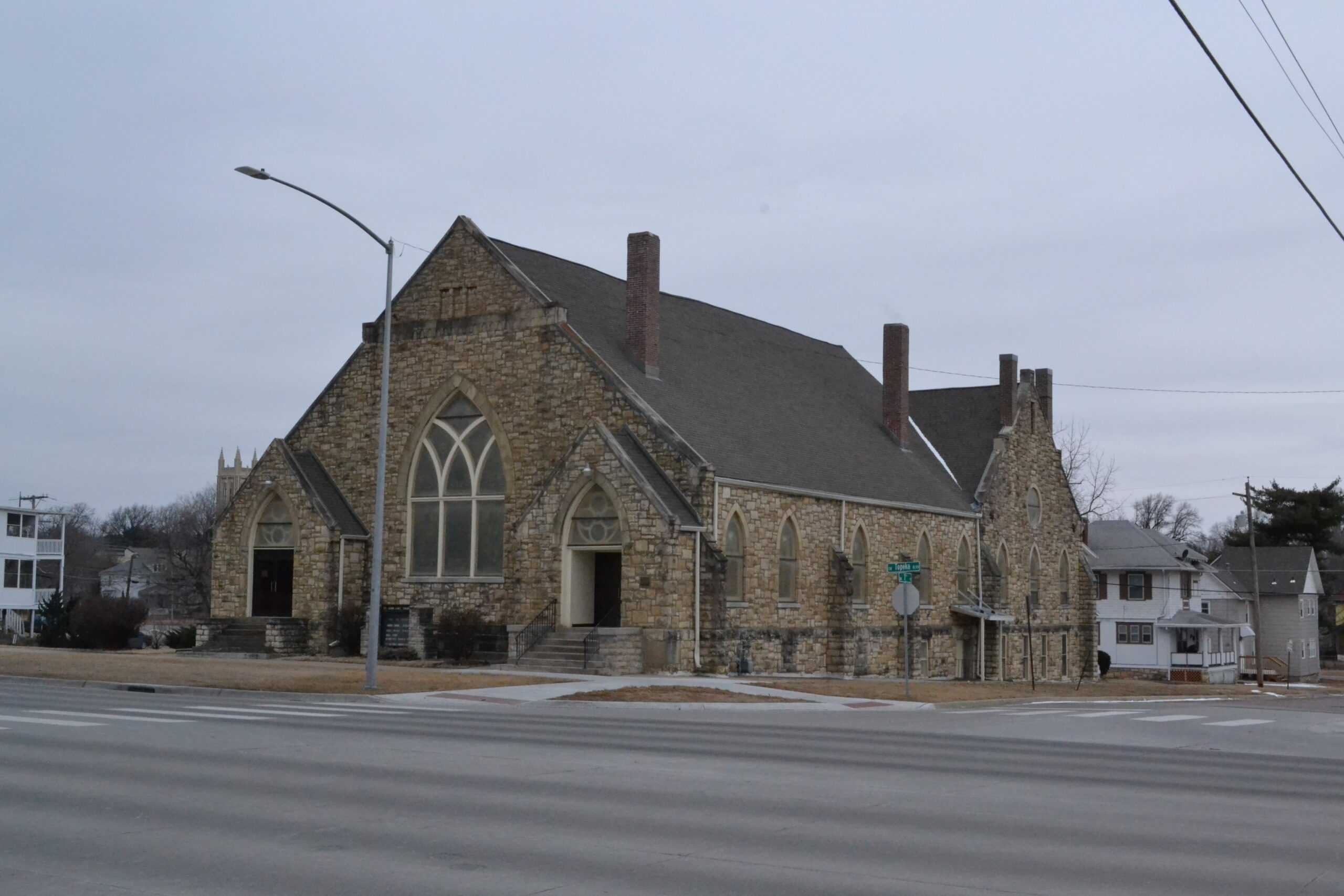 St. John African Methodist Episcopal (A.M.E.) Church in Topeka, Kansas was officially organized in 1877 when it was chartered by Reverend John M. Wilkerson of the Missouri African Methodist Episcopal Conference.  In 1868, nine years before the charter, however, early black settlers, many of whom were former slaves, met in worship. Many of these former slaves were from Tennessee and settled in an area that would eventually be called Tennessee Town. Sixteen of these settlers, men and women, formed a church mission that served the needs of these Tennessee Town residents.  Initially they met inside a rented barn that faced an alley between Harrison and Van Buren Streets.

When the mission was finally recognized by the AME conference in 1877, Reverend Wilkerson served as its first minister and it became St. John AME. In 1879 the first church building was constructed after two lots were purchased at the corner of Second Street and Madison Avenue. In this building the church received its second AME Conference-appointed pastor, Reverend Schuyler Washington. Three years later new lots were purchased and in 1886 the church moved to where it currently stands today, the corner of Seventh Street and Topeka Avenue just within sight of the Kansas State Capitol. The church was rebuilt at that site between the years of 1908 to 1926.

As one of the oldest black churches in the state, St. John AME has played a significant role in shaping the Topeka African American community.  Besides attending to the community’s spiritual needs, it has been a site of education and community organizing.  As early as 1868 the church organized and sponsored literacy classes for adults and children.  In 1873 black Topekans met there to protest segregation in education, public accommodations, and public transportation.  In 1895 its members supported the founding of the Kansas Industrial and Educational Institute (KIEI).  Described as a “western” Tuskegee, the school initially for African Americans had evolved by 1919 into the Kansas Vocational Institute, a state-run school open to students of any racial background.

During the 1879-1880 Exoduster movement which brought over 6,000 nearly destitute blacks from Mississippi, Louisiana, and Texas to Kansas, the church provided relief and sought to integrate newcomers into the state.  In 1879 Kansas Governor John P. St. John appointed Reverend Thomas W. Henderson of St. John AME to the Kansas Freedman’s Relief Association (KFRA) to help with health concerns of the Exodusters, as the migrants were called.  Henderson was also active in setting up Topeka’s first African American newspaper, the Topeka Colored Citizen. The Colored Citizen, edited by William L. Eagleson, soon became the voice not only of the Topeka black community but of much of African American Kansas.

In 1907 St. John AME hosted the annual meeting of the National Negro Business League (NNBL), an organization founded by Booker T. Washington to encourage entrepreneurship and economic development among African Americans. The NNBL returned to Topeka in 1914.

By the early 1950s St. John remained at the center of efforts to end segregated education in Kansas.  Its assistant pastor, Oliver Brown, was the father of Linda Brown, the girl who became the symbol of the national challenge to de jure school segregation.  It was Oliver Brown, however, whose name was given to the 1954 U.S. Supreme Court decision in Brown v. Board of Education.  The Browns, however, were among a number of St. John families who were involved in this case.