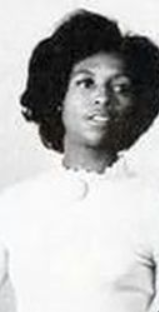 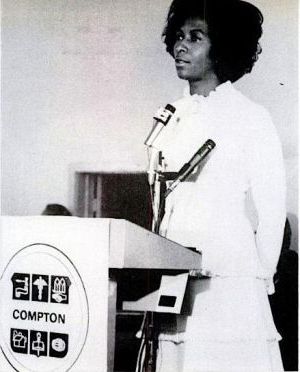 Doris A Davis Sworn in as Mayor of Compton, 1973

In 1973 at the age of 37, Doris A. Davis became the second African American mayor of Compton, California after defeating the incumbent, Douglas Dollarhide, the city’s first black mayor. Davis served as mayor of Compton, a Los Angeles bedroom suburb of 78,547 in 1970, from 1973 to 1977.  With her election Davis became the first black woman mayor of a city of more than 50,000 residents.

Davis, an only child, was born in Waukegan, Illinois to Ruby and Cornelius Collins.  Her parents separated before she turned five. Davis, who graduated from Wendell Phillips High School in Chicago, received a B.A. in education from Chicago Teacher’s College followed by an M.A. in educational administration from Northwestern University.  While working on a doctorate at the University of Chicago she married her first husband, a dentist, in 1959. She and Dr. Davis moved to California in that same year, and she continued to work as a teacher for Los Angeles City schools. By 1965, the couple had two sons: John Kennedy and Shedrick. The couple divorced in 1969, the same year Davis was re-elected as city clerk.  She remarried in 1970, to Earnest Preacely, the president of a management consulting firm.

Davis entered politics in 1965 when she beat 28-year incumbent Clyde Harland, and became the first African American city clerk of Compton. She won re-election in 1969 with over 80 percent of the vote. During that period the city that had once briefly (1949-1950) been home to George H.W. Bush and his family, now changed dramatically. After the 1965 Watts riot in neighboring Los Angeles, Compton received an influx of Africa Americans who made the city 70% black by 1970 and much more impoverished. While Davis had won in, and served as city clerk in, a mostly white city, by the time she was elected mayor in 1973, the city was radically different. The citizens of Compton now faced high crime rates, the emergence of gangs, and high unemployment.

Davis attempted to bring change to an increasingly hopeless city.  Davis’s mayoral campaign had called for an annexation program to increase tax revenues. She also urged the hiring of police to reduce the crime rate and creating job opportunities by luring employers to the city. During her first summer in office she opened the city’s elementary schools for recreational programs to keep kids off the streets. Most of her efforts were unsuccessful. After four years in office, she did not seek re-election.

Doris Davis belonged to over two dozen organizations including the NAACP, Urban League, and the League of Women Voters. In 1967, while still serving as city clerk, Davis founded the Daisy Child Development Centers, a non-profit organization providing employment opportunities, housing, and child care for unwed teenage mothers.  Doris A. Davis continues to live in Compton.