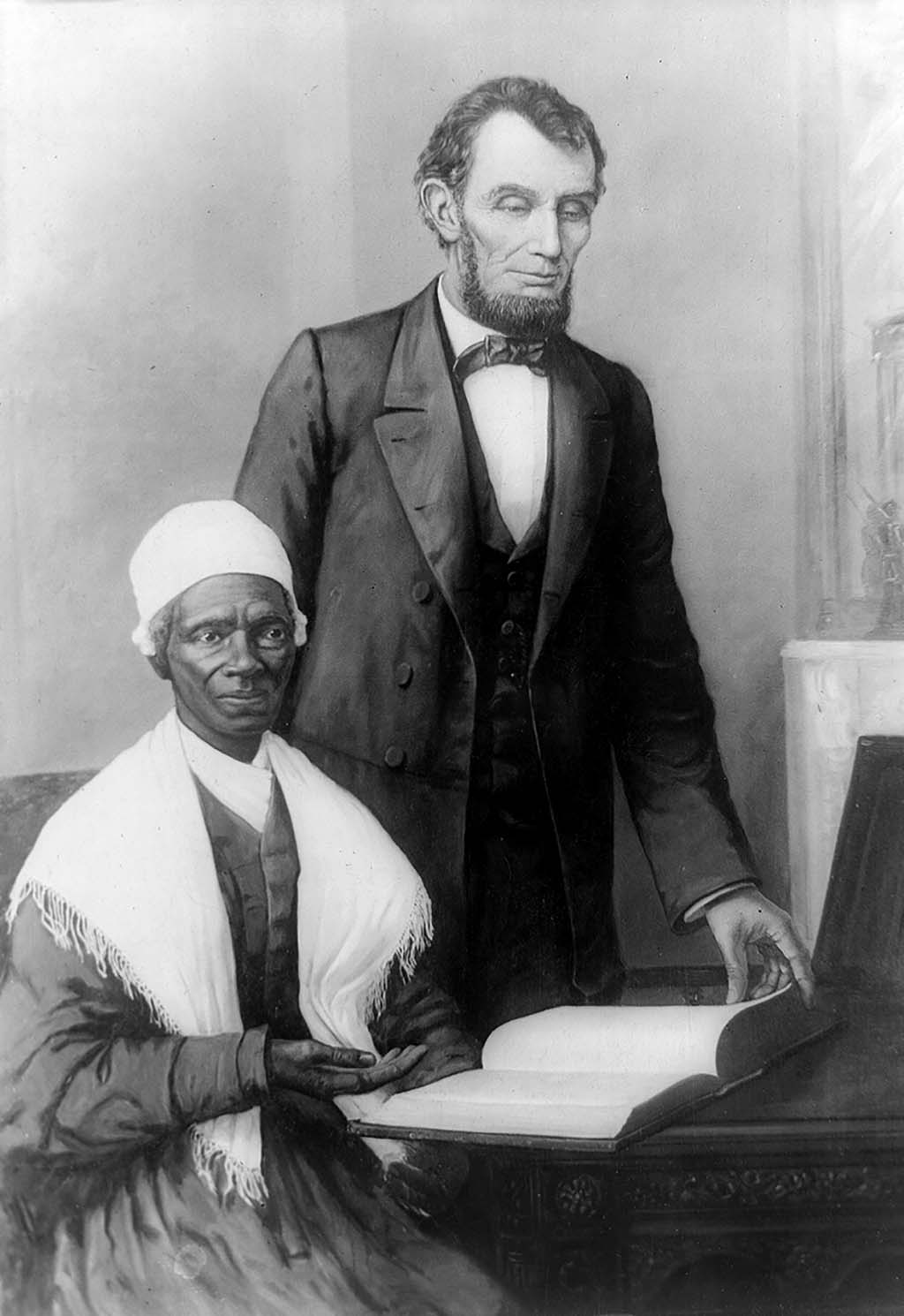 Sojourner Truth (c. 1797-1883) was arguably the most famous of the 19th Century black women orators. Born into slavery in New York and freed in 1827 under the state’s gradual emancipation law, she dedicated her life to abolition and equal rights for women and men. Two versions of her most noted speech appear below. Scholars agree that the speech was given at the Women’s Rights Convention in Akron, Ohio, on May 29, 1851. After that, there is much debate about what she said and how she said it. The version that is most quoted was published in the 1875 edition of Truth’s Narrative (which was written by others) and in Elizabeth Cady Stanton’s History of Woman Suffrage which appeared in 1881. Both versions were published 25 years after Truth spoke. However the Salem, Ohio, Anti-Slavery Bugle published its version of the speech on June 21, 1851. Since that version appeared within a month of her presentation, many historians believe it to be the more accurate rendering of the talk. However both versions rely on the interpretations of others. Since no written transcript of the speech has appeared, what Truth actually said, as historian Nell Painter has pointed out, will probably never be known.

Well, children, where there is so much racket there must be something out of kilter. I think that ‘twixt the negroes of the South and the women at the North, all talking about rights, the white men will be in a fix pretty soon. But what’s all this here talking about?

That man over there says women need to be helped into carriages, and lifted over ditches, and to have the best place everywhere. Nobody ever helps me into carriages, or over mud-puddles, or gives me any best place! And arn’t I a woman? Look at me! Look at my arm! I have ploughed, and planted , and gathered into barns, and no man could head me! And arn’t I woman? I could work as much and eat as much as a man—when I could get it—and bear the lash as well! And arn’t I a woman? I have borne thirteen children, and seen them most all sold off to slavery, and when I cried out with my mother’s grief, none but Jesus heard me! And aren’t I a woman?

Then they talk about this thing in the head; what’s this they call it? [“Intellect,” whispered someone near.] That’s it, honey. What’s that got to do with women’s rights or negro rights? If my cup won’t hold but a pint, and yours holds a quart, wouldn’t you be mean not to let me have my little half-measure full? Then that little man in black there, he says women can’t have as much rights as men, because Christ wasn’t a woman! Where did your Christ come from? From God and a woman! Man had nothing to do with Him….

If the first woman God ever made was strong enough to turn the world upside down all alone, these women together ought to be able to turn it back, and get it right side up again! And now they are asking to do it, the men better let them.

FROM THE ANTI-SLAVERY BUGLE:

One of the most unique and interesting speeches of the convention was made by Sojourner’s Truth, an emancipated slave. It is impossible to transfer it to paper, or convey any adequate idea of the effect it produced upon the audience. Those only can appreciate it who saw her powerful form, her whole-souled, earnest gesture, and listened to her strong and truthful tones. She came forward to the platform and addressing the President said with great simplicity:

May I say a few words? Receiving an affirmative answer, she proceeded; I want to say a few words about this matter. I am a woman’s rights [sic]. I have as much muscle as any man, and can do as much work as any man. I have plowed and reaped and husked and chopped and mowed, and can any man do more than that? I have heard much about the sexes being equal; I can carry as much as any man, and can eat as much too, if I can get it. I am strong as any man that is now.

As for intellect, all I can say is, if woman have a pint and man a quart—why can’t she have her little pint full? You need not be afraid to give us our rights for fear we will take too much—for we won’t take more than our pint’ll hold.

The poor men seem to be all in confusion and don’t know what to do. Why children, if you have woman’s rights give it to her and you will feel better. You will have your own rights, and they won’t be so much trouble.

I can’t read, but I can hear. I have heard the Bible and have learned that Eve caused man to sin. Well if woman upset the world, do give her a chance to set it right side up again. The lady has spoken about Jesus, how he never spurned woman from him, and she was right. When Lazarus died, Mary and Martha came to him with faith and love and besought him to raise their brother. And Jesus wept—and Lazarus came forth. And how came Jesus into the world? Through God who created him and woman who bore him. Man, where is your part?

But the women are coming up blessed be God and a few of the men are coming up with them. But man is in a tight place, the poor slave is on him, woman is coming on him, and he is surely between a hawk and a buzzard.