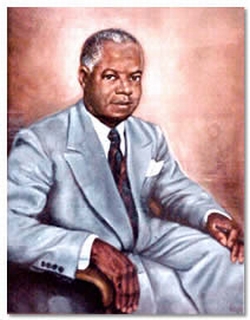 Antonio Maceo Smith, educator, entrepreneur, and civil rights activist, was born on April 16, 1903 in Texarkana, Texas to Howell and Winnie Smith. Smith attended segregated primary and secondary schools in his hometown. In 1924 he earned an A.B. degree from Fisk University and then attended New York University, earning an MBA in 1928. Smith continued his educational pursuits, earning master’s degrees in economics and business law from Columbia University. After graduating, he opened an advertising agency in New York.

In 1932 Smith moved to Dallas, Texas to teach business courses in the segregated Dallas Independent School District. He also became the editor of the Dallas Express, a weekly black newspaper. In the early 1930s, he promoted black economic and political empowerment in the area by becoming the first executive secretary of the Dallas Negro Chamber of Commerce. Under his leadership at the Chamber in the 1930s, Smith sponsored voter registration programs. He also collaborated with the National Association for the Advancement of Colored People (NAACP) and other political and civil rights organizations such as the Democratic Progressive Voters League and the Council of Negro Organizations to promote racial equality and challenge the Democratic Party’s white primary system in Texas.

In 1936 Smith became deputy director of the Hall of Negro Life at the Texas Centennial Exposition and later that year married Fannie C. Fletcher. The following year he was appointed to an administrative position with the Federal Housing Administration. In 1939 the United States Housing Authority chose Smith to serve as a regional relations advisor.

During the 1940s Smith continued to participate in statewide civil rights campaigns. In 1944 he worked closely with the legal team of the NAACP on the voting rights discrimination lawsuit Smith v. Allwright. Smith also participated in the NAACP’s legal campaign to end educational segregation in Texas in the civil suit Sweatt v. Painter.

Along with his involvement in the business community and civil rights movement, Smith served as president of Alpha Phi Alpha Fraternity in the 1950s and was a member of the Knights of Pythias and New Hope Baptist Church in Dallas, and a trustee at Bishop College.