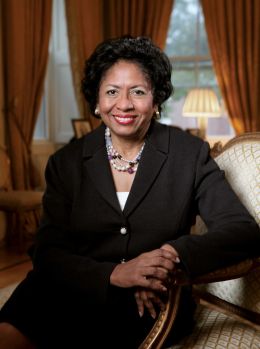 Ruth Simmons was born in 1945 in Grapeland, Texas, the youngest of twelve children in a family of sharecroppers. Later in her life, when her family moved to Houston, her father worked in a factory and her mother worked as a maid. Simmons received her Bachelor’s Degree from Dillard University in 1967, graduating with honors. She then received both her M.A. and PhD. degrees in Romance Literature from Harvard University in 1970 and 1973.  Simmons held administrative positions at the University of Southern California, beginning in 1979, first as assistant dean of graduate studies and then as associate dean of graduate studies. From 1983 to 1990, she served as a professor of romance languages at Princeton University, and became a dean of faculty there in 1986. After serving two years as provost of Spelman College (1990-1992), Simmons was named President of Smith College in 1995. While serving there, she initiated the first engineering program at any American women’s college.

In 2001, Simmons became President of Brown University in Providence, Rhode Island.  During her presidency, she launched an initiative known as Boldly Brown: The Campaign for Academic Enrichment, which pledged $1.4 billion toward enhancing Brown’s academic programs. She also helped secure a number of high-profile donations to the school to develop various departments and the school’s scholarship programs. Additionally, she helped revise Brown’s admission policies to ensure that students of all income levels are considered on an equal basis.  In 2003, Simmons established the University Steering Committee on Slavery and Justice to explore the university’s historical connection with the slave-trading industry. Simmons has been a particularly prominent advocate of equal opportunity education for students of color and has encouraged these students to study the liberal arts at a time when many other educational leaders promoted the professions as the best career choice.

Simmons is involved with multiple organizations, including the American Academy of Arts and Sciences, the American Philosophical Society, the Council on Foreign Relations, and the Council of Ivy Group Presidents. She serves on a variety of corporate boards including Texas Instruments and Goldman Sachs. In 2009, she was named by President Barack Obama to the President’s Commission on White House Fellowships.