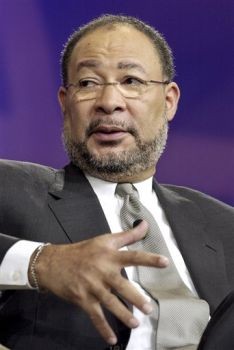 Richard Dean Parsons, former Chief Executive Officer (CEO) of Time Warner Inc., is the current Chairman of Citigroup. Despite his working class origins, Parsons’ achievements have been recognized by the African American community and he has become an influential role model for racial uplift. Born in Brooklyn, New York in 1948, he was one of five children. He was raised in South Ozone Park, Queens and attended New York City public schools. After graduating high school at the age of 16, he attended the University of Hawaii where he excelled academically and athletically. At the university, he was a varsity basketball player and the social chairman of Omega Psi Phi and he met his future wife Laura Ann Bush who he married in 1968.

In pursuit of a law career, he graduated at the top of his class at the University of Albany Law School in 1971. To pay for law school, he worked part time as a janitor and later as an aide in the New York State Assembly.  At the age of 23, he became an aide on the legal staff of Nelson Rockefeller, governor of New York.  He also worked with U.S. President Gerald Ford as general counsel and later as an associate director of the Domestic Policy Council. His association with Rockefeller and Ford shaped his political choices. Parsons describes himself as a Rockefeller Republican because he is conservative on economic matters but liberal in regard to social issues.

In 1977, Parsons joined the law firm of Patterson, Belknap, Webb, & Tyler where he worked for 11 years.  Although he was asked to head the firm, he instead entered the corporate world, becoming the Chief Operating Officer (COO) of the Dimes Savings Bank of New York in 1988.  Parsons was the first African American COO of a non-black bank.  Despite lacking previous experience in banking, Parsons dramatically reduced the debt of the Dime and became its CEO in 1990.

After his success with Dime, he joined Time Warner, Inc. in 1995 as the company’s President.  In 2001, Parsons was instrumental in the merger of AOL and Time Warner.  Even though the merger was a failure, Parsons, because of his efforts in reducing the company’s $27 billion debt, became Time Warner’s CEO, a position he held from 2002 to 2007.  Parsons remained with the company as its Chairman until 2008. After his leadership in Time Warner, Parsons became Chairman of Citigroup in 2009, the position he currently holds.