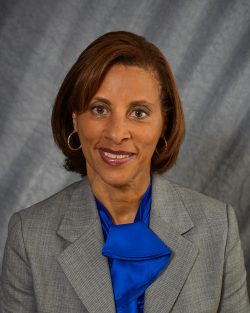 Myra Consetta Selby has served as both the first African American and first female associate justice appointed to the Indiana Supreme Court.  Selby was born in 1955 in Bay City, Michigan. Selby’s father, the late Ralph L. Selby, worked as an attorney; her mother Archie was a fourth-grade school teacher.  Selby graduated from the Bay City Central High School in 1973. Selby received a Bachelor of Arts degree with honors in 1977 from Kalamazoo College.  In 1980 Shelby received a Juris Doctor degree from University of Michigan Law School.

After law school Selby was admitted to practice law in Washington, D.C., practicing there for three years from 1980 to 1983 at the law firm of Seyfarth Shaw LLP.  Thereafter, Selby’s career moved into a new region, wherein she was admitted to practice in the State of Indiana and became an associate attorney with the law firm of Ice, Miller, Donadio and Ryan, located in Indianapolis, Indiana. At Ice, Miller, Selby’s legal concentration specialized in healthcare law.  By 1988, Selby had become the first African American attorney to become a partner within the Ice, Miller firm and continued there until 1993.

In 1993 Selby became the State of Indiana’s Health Care Policy Director until 1994 and served in that position until appointed to the State’s highest court.  In 1995 Selby was appointed as the first woman and first African American to serve on the court, appointed by Governor Evan Bayh, replacing the retired Justice Richard M. Givan.  Selby was affirmed the 103rd justice of the Indiana Supreme Court.  While serving on the court Selby authored over 100 majority opinions, which received national recognition.  During Selby’s final year on the court, in the case of Delta v. Johnson, 712 NE 2d 968, (Ind. 1999), a frat party sexual assault case, Selby utilized the principle of totality of circumstance in the opinion.

After her appointed term, Selby won the election retention for another ten years.  Nevertheless, in 1999 Shelby retired from the bench and returned to private practice at Ice Miller LLP. Upon departing the bench in 1999, Selby was appointed chair of the newly created State of Indiana Commission on Race and Gender Fairness, which investigates ways to improve fairness for all people within the legal system. Selby has also been an adjunct professor at Indiana University Robert H. McKinney School of Law, teaching food and drug law and health care reimbursement.

Currently, Selby still chairs the Commission on Race and Gender Fairness. In addition, Selby continues to be an active partner at Ice Miller LLP in Indianapolis, Indiana, practicing commercial litigation with a concentration in health care.  Selby was also nominated on January 12, 2016 by President Barack Obama to serve on the United States Court of Appeals for the Seventh Circuit. Senator Dan Coats (Republican-Indiana) blocked a hearing on Selby’s nomination by refusing to submit the blue slip that was required from each home state Senator. Senator Joe Donnelly (Democrat-Indiana) made his submission. Selby was not confirmed for the Appeals Court. Selby is married to Bruce Curry and they have two children: a daughter, Lauren and son, Jason.