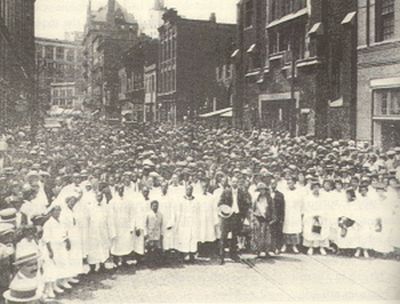 The Second Baptist Church of Detroit, located in the Greektown district of downtown Detroit, is the oldest African American congregation in Michigan and, according to some sources, the Midwest.

The church has been active in struggles for freedom and equality since its founding in 1836 when Michigan was still a Territory. Thirteen former slaves formed the church after being subjected to racial discrimination at the First Baptist Church of Detroit. Just seven years later, the first State Convention of Colored Citizens met at Second Baptist, demanding the right to vote in Michigan and an end to slavery across the nation.

With activist William C. Monroe at the helm as its first pastor, the church was active in anti-slavery debates. Second Baptist was pivotal in the formation of two abolitionist societies, the Amherstburg Baptist Association and the Canadian Anti-Slavery Baptist Association. Leaders at Second Baptist worked with abolitionists John Brown, Sojourner Truth, and Frederick Douglass. Less than three miles from the Canadian border, Second Baptist became a major stop on the Underground Railroad, hosting 500 fugitives over 30 years.

Educational opportunity has been a cornerstone of the Second Baptist Church throughout its history. It established the first school in Detroit for African American children, and one of its Sunday School teachers, Fannie Richards, became Detroit’s first African American school teacher, presiding over an integrated classroom.

Robert L. Bradby, pastor from 1910 to 1946, led Second Baptist during the pivotal years of the Great Migration, during which millions of African Americans migrated out of the South, many of them arriving in Detroit. Throughout this period, the church offered information on housing and relocation and even served as an employment center. Bradby leveraged his relationship with automaker Henry Ford to link hundreds of migrants to jobs at the Ford Motor Company. Already the largest African American congregation in Detroit in 1915, membership exploded with the migration and the church became an epicenter of black social life during the 1920s.

During World War I and the Great Depression, Second Baptist raised over $500,000 to serve Detroit’s African American community (between $9,000,000 and $11,000,000 in 2014 dollars). The church has worked collaboratively throughout its history with activist and community organizations, such as the National Association for the Advancement of Colored People (NAACP) and the Urban League.

The Second Baptist Church of Detroit is listed with the National Register of Historic Places and Michigan Historic Sites. The church has been located at 441 Monroe Street since 1857. It is currently housed in a newer, gothic structure, built after a 1914 fire and expanded in 1926 and 1968. It remains an active congregation to this day.