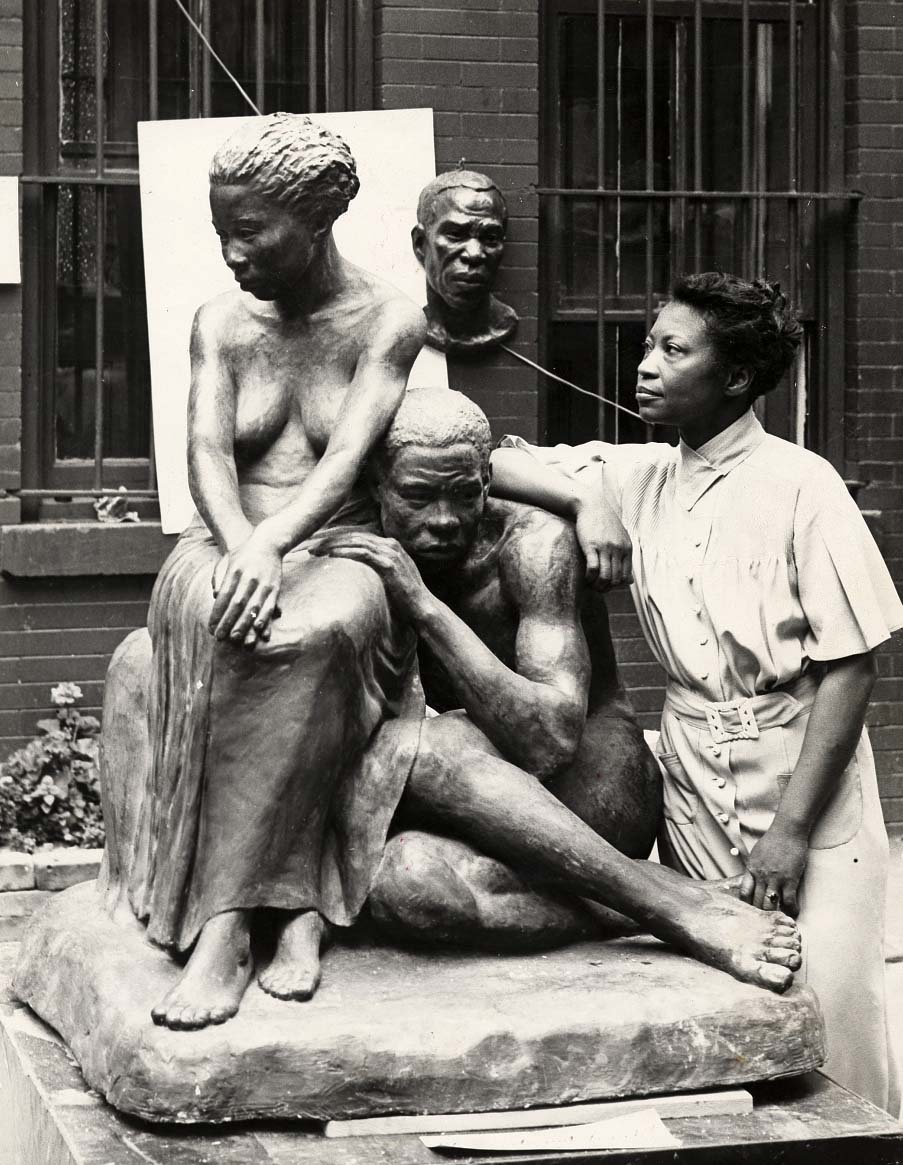 African American sculptor, teacher, and advocate for black artists Augusta Savage was born Augusta Christine Fell in Green Cove Springs, Florida on February 29, 1892, the child of Edward Fells, a laborer and Methodist minister, and Cornelia Murphy. Her daughter, Irene Connie Moore, was born when Savage was 16, in the first of her three marriages. She retained the last name of her second husband, a carpenter named James Savage; they were divorced in the early 1920s.

After moving to Harlem in New York in 1921, Savage studied art at the Cooper Union for the Advancement of Science and Art where she finished the four-year program in three years. She was recommended by Harlem librarian Sadie Peterson (later Delaney), for a commission of a bust of W.E.B. DuBois.  The sculpture was well received and she began sculpting busts of other African American leaders, including Marcus Garvey.

Savage’s bust of a Harlem child, Gamin (1929), brought her fame as an artist, and a scholarship to study at the Academie de la Grande Chaumiere in Paris. In France, she associated with expatriates Henry Ossawa Tanner, Claude McKay, and Countee Cullen. Savage had first received a French scholarship in 1922 but the offer was rescinded when white Alabama students who had received similar grants refused to travel to France unless she was removed from the group.  Her unsuccessful appeal against that loss initiated her lifelong fight for civil rights and the recognition of black artists. Her challenge to the denial of her application was reported in both the black and white presses.

Savage exhibited in several galleries and had numerous commissions, among them for busts of James Weldon Johnson and W.C. Handy, after her return from Paris to Harlem. With a grant from the Carnegie Foundation, she founded in 1932 the Savage School of Arts, which was the largest program of free art classes in New York. Her students included painter Jacob Lawrence and psychologist Kenneth B. Clark. In 1934, Savage became the first African American woman elected to the National Association of Women Painters and Sculptors. She was president of the Harlem Artists Guild during the 1930s.

Using her appointment in 1936 as an assistant supervisor in the Federal Arts Project (a division of the Works Progress Administration or WPA), she fought for commissions for black artists and to have African American history included on public murals. Savage was the first director of the Harlem Community Art Center, the most successful community center of the Federal Arts Project. After resigning from the WPA in 1939, she opened the Salon of Contemporary Negro Art in Harlem, which was America’s first gallery for the exhibition and sale of works by African American artists. Works exhibited included those by Beauford Delaney, James Lesesne Wells, Lois Mailou Jones, and Richmond Barthe. The gallery was not financially successful, however, and was forced to close after several months.

Although she was a leading artist of the Harlem Renaissance, low sales and a lack of financial resources dogged Savage’s career. Many of her works were done in plaster, and she was unable to raise the money to have them cast in more permanent materials, so not all have survived. Most notably, the 16-foot-tall 1937 sculpture The Harp, also known as Lift Every Voice and Sing, commissioned for and a popular display at the 1939 New York World’s Fair, was destroyed when the fair was over because she didn’t have the funds to have it removed from the fairgrounds and cast in a more permanent material. When the Schomburg Center had a retrospective of her work in 1988, only 19 pieces were located.

Savage became reclusive in the early 1940s, and died of cancer on March 26, 1962, after spending her last year with her daughter in New York.