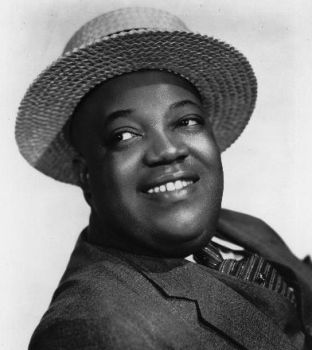 James Andrew “Jimmy” Rushing—affectionately known as “Mister Five-By-Five” for being “five feet tall and five feet wide”—was a blues shouter born in Oklahoma City to a musical family on August 26, 1902 (give or take a year according to different sources). His father played trumpet and his brother and mother were vocalists, but he also studied violin, piano and music theory. After moving across the Middle West, Rushing made his way to California in the mid-1920s and began performing in nightspots. He left the Billy King Revue for Walter Page’s Blue Devils in 1927; two years later he started touring with Bennie Moten until the bandleader’s death in 1935. Count Basie drew together many of the members of Moten’s band and had Rushing open for him at the Reno Club. He remained Basie’s featured vocalist until 1948.

Rushing’s booming blues voice matched well with the swinging Basie rhythm section. While with Basie from 1935 to 1950, his fame reached its greatest height. His studio debut came in 1936 with his recording of “Boogie Woogie” which signaled his arrival onto the national scene along with Lester Young. His performance on “Sent For You Yesterday” helped maintain the Kansas City jump blues tradition. He is best known for “Going to Chicago” and “Every Day I Have the Blues.” Rushing also made several short and feature film appearances with the Count Basie orchestra.

After a hiatus following the break up of Basie’s ensemble in 1950, Rushing formed his own septet. He continued recording music in the 1950s, first with a series of solo albums, then with several recordings with various jazz greats and Basie alumni. In 1957, he had a TV appearance in The Sound of Jazz. Jon Hendricks featured him in the film The Evolution of the Blues, and Gordon Parks gave him a singing and acting role in his 1969 film The Learning Tree. Rushing died of leukemia on June 8, 1972, in New York City. His profound impact on African American popular music inspired B. B. King to call him the Henry Ford of the Blues, “a real inventor.”