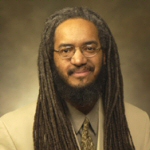 Amilcar Shabazz, Professor and Chair of the W.E.B. DuBois Department of Afro-American Studies at the University of Massachusetts, Amherst, has been in the teaching game almost twenty years. His Advancing Democracy: African Americans and the Struggle for Access and Equity in Higher Education in Texas (University of North Carolina Press, 2004), won the T. R. Fehrenbach Book Award and Essence Magazine named it a top ten recommended non-fiction book. The Forty Acres Documents, a sourcebook on reparations, is among his many other published writings. Shabazz has presented scholarly papers, taught classes, and conducted research across the U.S. and abroad, and in 2004, was named a Fulbright Senior Specialist in São Paulo, Brazil. He is currently completing Carter Wesley: Master of the Blast, a book about a Texas-born entrepreneur and civil rights activist who tried to embody W. E. B. Du Bois’s “Talented Tenth” race man idea. Also, Shabazz’s Continuous Struggle: American Democracy’s Last Great Hope is a new work in progress focused on the political lives of two women in Austin, Texas, Dorothy Turner and Velma Roberts, and the transformative possibilities of grassroots activism in the postmodern/postcolonial era of the last quarter of the twentieth century.

A. J. Smitherman, best known as a heroic advocate of self-defense for African Americans in a time of intense racist violence, “A.J.” Smitherman was a leading black political figure in the American West. Born on December 27, 1883, in Childersburg, Alabama, Smitherman moved to Indian … END_OF_DOCUMENT_TOKEN_TO_BE_REPLACED

James Andrew “Jimmy” Rushing—affectionately known as “Mister Five-By-Five” for being “five feet tall and five feet wide”—was a blues shouter born in Oklahoma City to a musical family on August 26, 1902 (give or take a year according to different sources). His father played trumpet … END_OF_DOCUMENT_TOKEN_TO_BE_REPLACED

An outstanding educator and academic leader, Inman Edward Page was born in Warrenton, Virginia, on December 29, 1853. On the plantation where he and his parents were enslaved, Page was a houseboy. When he was about ten years old the Civil War brought Union and … END_OF_DOCUMENT_TOKEN_TO_BE_REPLACED