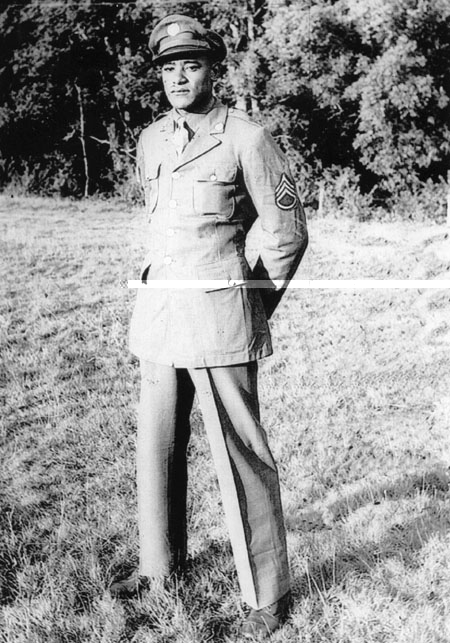 Ruben Rivers was a United States Army staff sergeant who served as a tank company platoon leader during World War II. Rivers was born in 1921 to Willie and Lillian Rivers in Tecumseh, Oklahoma. He grew up nearby Hotulka, Oklahoma where he and his eleven brothers and sisters worked on the family farm. In 1930, the family moved to Earlsboro, Oklahoma. After graduating from high school in Earlsboro, Rivers worked on the railroad for a while. When the United States entered World War II, Rivers and his two brothers joined the armed forces in 1942. Rivers was assigned to the 761st Tank Battalion at Camp Hood in Texas. The Battalion was nicknamed the Black Panthers and they were attached to General George Patton’s U.S. Third Army.

After the D-Day Invasion, the 761st was sent to France. During the fall of 1944, General Patton selected the 761st to be part of the Saar Campaign in the Allied drive to the Siegfried Line near the border of Germany and France. On November 8, 1944, the battalion joined with the 104th Infantry and 26th Infantry Division in an attack on German positions near Vic-Sur-Sellie in Northeastern France. As they were entering the town, a roadblock improvised by the Germans using a falling tree and several land mines, stopped the progress of the tank battalion and infantry. The Germans then trained their fire on the tanks and the infantrymen stranded in the roadside ditches.

Rivers, who was positioned in Able Company’s lead tank, dismounted from his tank and in the face of enemy small arms fire, attached a cable to the roadblocking tree and moved it off the road which permitted the combat team to proceed. His actions prevented a serious delay in the overall offensive which included the capture of the town of Vic-Sur-Sellie. For this action, Rivers was awarded the 761st’s first Silver Star.

On November 16, 1944, Rivers and Able Company led another assault. The main target was German positions around Guebling in Northeastern France. As Rivers’ lead tank entered the town, it struck a mine that disabled the vehicle and injured him. Despite his seriously deteriorating medical condition, Rivers on November 19, continued to lead his tank company as they now advanced toward German positions near the town of Bougaitroff. There the Germans fired on Rivers’ tank, killing him and the other crew members instantly.

Rivers posthumously earned the Medal of Honor. It was scheduled to be given on November 20, 1944 but was not received until 50 years later due to what was subsequently revealed as racial discriminatory delays by the U.S. Army bureaucracy. On January 13, 1997, President William “Bill” Clinton presented the Medal of Honor Rivers to his surviving sister, Grace Woodfolk.