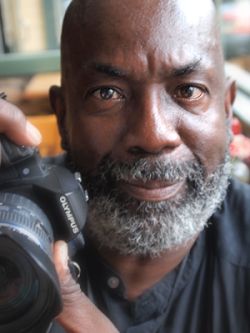 Ellis (Eli) Reed is a professor, author, and photographer.  He is the first African American selected as a full member into the Magnum Photos agency, the elite international photojournalist collective.  Having been published in close to 30 magazines, Reed is best known for his three decades of photojournalism that reflect his profound interest in the effects of war on society and social justice, particularly the lives of African Americans.

Reed was born on August 4, 1946 in Linden, New Jersey.  He grew up in the town of Perth Amboy, New Jersey and graduated from high school there in 1965.  He then enrolled in the Visual Illustration program at the Newark School of Fine and Industrial Arts in Newark, New Jersey, graduating in 1969.

Reed began his photography career as a freelance photographer in 1970.  During that time, from 1970 to 1976, he also worked as a full-time hospital orderly at night.  He credits his time spent in the hospital with providing the intensive study of the human character that informed his documentary photography career.

By 1977 Reed worked as a full time photographer at the Middletown Times Herald Record in upstate New York.  In 1978 he was hired by the Detroit News and in 1980 he began working for the Examiner in San Francisco, California.  His work at the Examiner would lead to his receiving runner-up designation for a Pulitzer Prize in 1981, at the age of 35.

Reed, in 1982 and 1983, was a Neiman Fellow at Harvard University where he studied political science, urban affairs, and Central America at the Kennedy School of Government.  After the fellowship, Reed caught the attention of Magnum Photos, one of the most prestigious documentary photo agencies in the world, based upon his work in Central American countries.  In 1983, he began working at Magnum as a nominee member.  In 1985, he was accepted as an associate member, and later became a full member in 1988.

Reed has authored two books, Black in America and Beirut, City of Regrets.  He has won over 10 awards.  Eli Reed became the first living artist to have a major one-person exhibit at the Bruce Museum in Greenwich, Connecticut.

Reed is currently a Clinical Professor of Journalism at the University of Texas, Austin.  He joined the faculty in 2005.