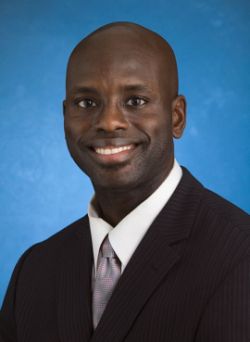 Corey Flournoy is an educator, diversity advocate, and entrepreneur. Flournoy went from an early life in Chicago’s crime-ridden projects to a career in agricultural sciences, becoming the first African American to be named president of the National Future Farmers of America (FFA) organization.  He was also the organization’s first president to come from an urban area.

Corey D. Flournoy was born in Chicago, Illinois in 1974. His single mother, Barbara, raised Corey along with a brother and foster sister. Rather than attend his neighborhood high school, Flournoy applied to Chicago’s magnet school system of specialized studies. The only school to accept him was the Chicago High School for Agricultural Sciences, which had recently opened its doors with a curriculum to prepare urban students for professions and careers in agriculture.

Flournoy reluctantly enrolled and entered the school’s FFA chapter, a requirement for all students. He soon found himself tasting milk samples and evaluating beef carcasses. He also spent six weeks working on a farm in central Illinois where he discovered his leadership skills. He won the election for vice president of the Illinois FFA. While his entry into agriculture was unplanned, Flournoy later said that it changed his life.

After graduating from high school in 1993, Flournoy entered the University of Illinois’ agricultural and consumer economics program. There he was encouraged to run for a national FFA office. The following year, he was elected president of the 400,000-member National FFA Organization at its 67th convention in Kansas City, Missouri.  At the time, less than five percent of the organization’s members were African American. He took a year off from his college studies to travel as FFA president from 1994 to 1995.

In 1996, Flournoy also became a founding partner in Creative Outreach, a diversity and motivational consulting group. The organization developed and delivered training programs for clients including AmeriCorps, DuPont, Monsanto, and the United States Department of Education.

In 2011, Flournoy left his teaching position to become founding director of the Center for Urban Agricultural Education, a partnership between the University of Illinois College of Agricultural, Consumer and Environmental Sciences (ACES) and Chicago high schools. The center’s goal is to help urban students gain a strong education in science, technology, engineering, and math (STEM) and develop further educational and career opportunities. The center has offices in Flournoy’s high school alma mater, the Chicago High School for Agricultural Sciences, where a working farm occupies 40 acres of school property.

“Corey Flournoy,” http://coreyflournoy.com/; “Corey D. Flournoy,” University of Illinois College of Agricultural and Environmental Sciences, http://aged.illinois.edu/faculty.php; Colin Hall and Ron Lieber, Taking Time Off: Inspiring Stories of Students Who Enjoyed Successful Breaks from College and How You Can Plan Your Own (New York: Princeton Review Publishing, 2003); “Future Farmers Chief Breaks New Ground: Agriculture: Corey Flournoy is the FFA’s First Black President and Its First Leader to Come From an Urban Area. But Rural Life is Not in His Plans,” Los Angeles Times (December 12, 1994)
http://articles.latimes.com/1994-12-04/news/mn-4616_1_corey-flournoy.