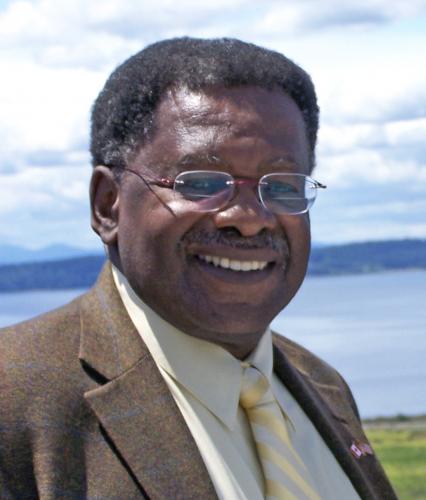 Lyle Quasim, born Lyle Rogers in Chicago in 1943, has held leadership positions in public health and administration in Tacoma, Pierce County, and the state of Washington.  In 1995 he became the first African American to head Washington’s Department of Social and Health Services (DSHS).  His father, Miller, was a self-taught tailor. His mother, Ophelia was an accountant with the Mine, Mill and Smelters Workers Union. An active member of the Socialist party, Quasim’s mother was committed to community welfare and advancement.

After briefly attending the University of Illinois, Quasim became a civil rights activist in 1964.  His political activism was influenced by the Socialist values of his mother. He was also influenced by the Nation of Islam, although not a member.  In 1970, he changed his name to acknowledge their shared values.

Quasim ignored a 1965 draft notice but in 1966 joined the Air Force, trained as a medic, and was sent to Vietnam, where his activism continued, and in 1969 he left the military.  Having begun and ended his service at McChord Air Force Base, Quasim remained in Tacoma.  He received a degree in sociology from the University of Puget Sound (UPS) in 1970, a master’s degree in sociology from Pacific Lutheran University in 1973, and in 2005, an honorary doctorate from UPS.

Quasim joined Tacoma’s Black Panther Party, which ran a Liberation School and other community services.  In 1969, he began professional employment in the mental health field, working night shifts so that he could commit daytime to the Liberation School.  In 1969, Tacoma experienced a crisis in race relations, highlighted by the Mother’s Day disturbance on May 11.  The black leaders who helped quell the violence and win concessions from the city formed a group that in 1970 became the Black Collective, a leadership organization which addressed issues facing the Tacoma black community.  Quasim has co-chaired this voluntary organization since its inception to the present.

Quasim’s career at DSHS began in 1973, where he assumed increasing responsibility, eventually becoming Director of State Mental Health Services.  When gang violence rose in Tacoma, he returned to the city in 1988 to serve as the first director of the Safe Streets Campaign, whose model of community engagement was recognized by Harvard University’s Kennedy School of Public Affairs.  In 1995 he returned to the agency to become its first African American Secretary (director) in 1995, a position he held until 2000.  From 2001 through 2008 he was Chief of Staff for Pierce County Executive, John Ladenburg.