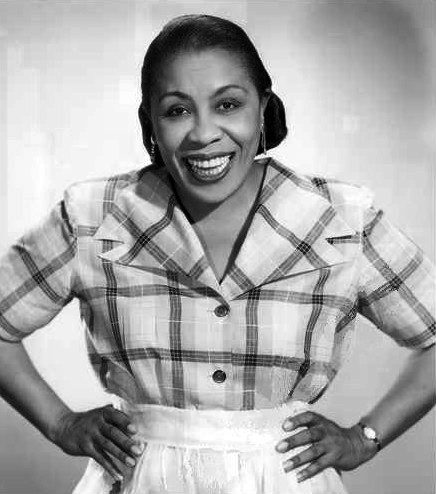 Lillian Randolph was a 20th Century actress who routinely, yet proudly, presented the role of the black domestic in film and radio and defended her right to maintain such characters in an intelligent fashion for much of her career.  Randolph was born in Knoxville, Tennessee in 1915. She first entered the world of entertainment as a singer at WJR Radio in Detroit in the early 1930s.

In 1936, Randolph migrated to Los Angeles and made her debut as a singer at the Club Alabam. Five years later, she landed the role of the maid, Birdie, on the radio and TV series The Great Gildersleeve, and soon became one of the most sought after black actresses of the period.  Randolph portrayed Birdie until 1957. She simultaneously played the role of Daisy, the housekeeper on The Billie Burke (radio) situation comedy from 1943 to 1946, and title role of the radio show Beulah in the early 1950s when Hattie McDaniel became ill. Also in the early 1950s she performed on the Amos n’ Andy show, recreating the role of Madame Queen, which she first played on the radio version of the series.

In 1946, Randolph and Sam Moore, one of the script writers of The Great Gildersleeve program, published a rebuttal to those critics in Ebony magazine.  Randolph defended her role as the character Birdie, reminding Ebony‘s readers that the show’s writers had never written dialect into the script and were particularly careful not as not to offend black viewers. Randolph valued the benefits that such parts brought to her career and fought to protect the availability of roles from the efforts of those protesting anti-stereotypical roles in film and radio.

In the early 1960s, Randolph spent several years coaching drama and resumed her singing and acting careers. For more than a decade, she also supplied the voice of the cook, Mammy two-shoes, in the Tom and Jerry cartoon series. Although she repeatedly received several complaints from the NAACP and black community activists who complained about her racially stereotypical roles, Randolph maintained her right to portray such characters as Madame Queen, Birdie, and as the voice of the cook on the popular Hanna-Barbera cartoon Tom and Jerry despite public opposition.

By the 1970s, Randolph had made more than 75 film and television appearances and reached a career that spanned more than decades. Lillian Randolph died of cancer in 1980 in Los Angeles, California.