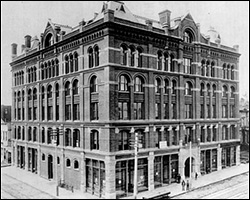 This is an application for a writ of mandate to compel the defendant, Crookshank, a teacher of a public school located in the city of Visalia school district, of the county of Tulare, to admit the plaintiff as a scholar. The application was denied, and from the judgment rendered therein, and an order refusing a new trial, this appeal is prosecuted.

The boy thus excluded from a public school established for white children is a person of African descent, and both he and his father are colored citizens of the state of California and of the United States.

The sole question to be determined is, whether or not, under the laws of this state touching the education of children in the public schools, it is within the power of the board of education of the city of Visalia, in the county of Tulare, to establish a public school exclusively for such children as the applicant, and to exclude them from the schools established for white children.

At the date of the decision rendered by the appellate court of this state in Ward v. Flood, 48 Cal. 37, the statute governing the admission of children to public schools ran thus:

“Sec. 53. Every school, unless otherwise provided by special law, shall be open for the admission of all white children between five and twenty-one years of age, residing in that school district, and the board of trustees or board of education shall have power to admit adults and children not residing in the district, whenever good reasons exist for such exceptions.

In pursuance of these statutes, the board of education of the city and county of San Francisco adopted a rule which provided that “children of African or Indian descent shall not be admitted into schools for white children; but separate schools shall be provided for them in accordance with the California school law.”

It was held in the case supra that separate schools for colored children of African descent might be established, and that such establishment was not in conflict with the constitution of the state, nor with the thirteenth and fourteenth amendments to the constitution of the United States; but that the legislature could not exclude children from the benefits of a system of education provided for the youth of the state, merely because such children, so excluded, were of African descent. It was there said, at page 56:

“In order to prevent possible misapprehension, however, we think proper to add that in our opinion, and as the result of the views here announced, the exclusion of colored children from schools where white children attend as pupils cannot be supported, except under the conditions appearing in the present case; that is, except where separate schools are actually maintained for the education of colored children; and that unless such separate schools be in fact maintained, all children of the school district, whether white or colored, have an equal right to become pupils at any common school organized under the laws of the state, and have a right to registration and admission as pupils in the order of their registration, pursuant to the provisions of subdivision 14 of section 1617 of the Political Code.”

If the statutes as they stood when the decision supra was made had remained the law of the state at the time when the petitioner made his application, there can be no question but that it might have been lawfully refused, as a separate school, in all respects like the white school in the same district, had been established for children of African descent.

“Sec. 1669. The education of children of African descent, and Indian children, must be provided for in separate schools; provided, that if the directors or trustees fail to provide such separate schools, then such children must be admitted into the schools for white children.

Section 1662 of the Political Code was by the same act amended so as to omit the word “white” before the word “children” as it had stood before that time, and as amended it read:

“Every school, unless otherwise provided by law, must be open for the admission of all children between six and twenty-one years of age residing in the district; and the board of trustees, or city board of education, have power to admit adults and children not residing in the district whenever good reason exists therefor. Trustees shall have the power to exclude children of filthy and vicious habits, or children suffering from contagious or infectious diseases.”

Following the repeal and amendment of the sections supra, a Mongolian or Chinese child applied for admission to a public school for white children, established in the city and county of San Francisco; its admission was refused by the teacher of the school, and an application for a writ of mandate was made to compel admission. The appellate court, in Tape v. Hurley, 66 Cal. 473, speaking by Mr. Justice Sharpstein, held that such Chinese or Mongolian child could not be excluded from a white school. And it was there said, in reference to section 1662 supra, as amended by striking out the word “white” before the word “children” (erroneously printed as section 1667 in the opinion):

“That is the latest legislative expression on the subject, and was passed as late as 1880. Prior to that time the first clause of the section read: ‘Every school, unless otherwise provided by special statute, must be open for the admission of all white children, between five and twenty-one years of age, residing in the district.’

“As amended, the clause is broad enough to include all children who are not precluded from entering a public school by some provision of law, and we are not aware of any law which forbids the entrance of children of any race or nationality. The legislature not only declares who shall be admitted, but also who may be excluded, and it does not authorize the exclusion of any one on the ground upon which alone the exclusion of the respondent here is sought to be justified. The vicious, the filthy, and those having contagious or infectious diseases may be excluded, without regard to their race, color, or nationality.

“In this case, if effect be given to the intention of the legislature, as indicated by the clear and unambiguous language used by them, respondent here has the same right to enter a public school that any other child has.

“The board of education has power ‘to make, establish, and enforce all necessary and proper rules and regulations not contrary to law,’ and none other. (Stats. 1871-72, p. 846.) Teachers cannot justify a violation of law, on the ground that a resolution of the board of education required them to do so.”

After the rendition of the judgment in this case, the legislature in 1885 amended section 1662 of the Political Code so as to add, after the word “diseases,” “and also to establish separate schools for children of Mongolian or Chinese descent. When such separate schools are established, Chinese or Mongolian children must not be admitted into any other school.” (Deering’s Political Code, sec. 1662.)

And so the law existed upon the subject at the date of the institution of this action, and so it stands now.

It must appear clear, therefore, that the power to establish separate public schools for children of African descent, and to exclude them from the public schools established for white children, has been taken away from boards of school trustees and boards of education, and that the power claimed by the teacher and the board of education of the city of Visalia does not exist.

If it had been intended by the law-making department of the government to invest such boards with the power claimed, it would have given it as expressly as it was taken away by the repeal and amendment of the statutes which once authorized it, and especially is this plainly to be discerned when section 1662, supra, as it now stands, gives the power to establish separate schools for Chinese or Mongolian children, but none other.

The whole policy of the legislative department of the government upon this matter is easily gathered from the course of legislation shown herein, and there can be no doubt but that it was never intended that, as a matter of classification of pupils, the right to establish separate schools for children of African descent, and thereby to exclude them from white schools of the proper district, should be given to such boards under section 1617 of the Political Code, which reads:

“The powers and duties of trustees of school districts and of boards of education in cities are as follows:

“1. To prescribe and enforce rules not inconsistent with law, or those prescribed by the state board of education, for their own government and the government of schools.”

If the people of the state desire separate schools for citizens of African descent, and Indians, their wish may be accomplished by laws enacted by the law-making department of the government in accordance with existing constitutional provisions. But this course has not been pursued, as the law now stands, and the powers given to boards of education and school trustees, under section 1617 of the Political Code, do not include the right claimed by the board of education of Visalia.

For these reasons, we advise that the judgment and order be reversed, and the court below directed to issue a mandate compelling the admission of the appellant as prayed for.

The Court—for the reasons given in the foregoing opinion, the judgment and order are reversed, and the court is directed to issue a mandate compelling the admission of the appellant as prayed for.