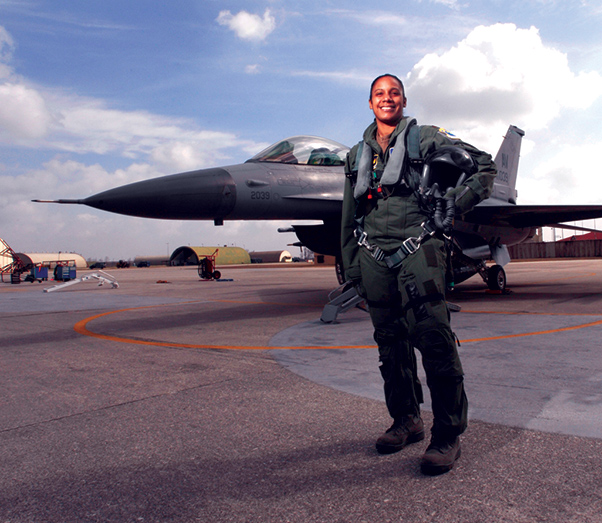 Lieutenant Colonel Shawna Rochelle Kimbrell is the first African American female fighter pilot in the United States Air Force. Kimbrell was born in Lafayette, Indiana on April 20, 1976. Her parents, Eve Blackman Ng A Qui and Dr. Norman N A Qui, migrated from Guyana and were naturalized citizens by the time Kimbrell was born. In her youth, the family moved to Parker, Colorado, and Kimbrell attended school there. She decided she wanted to become a fighter pilot in the fourth grade and had her first flight lesson at the age of fourteen. She joined the Civil Air Patrol and worked at air shows while earning her private pilot’s license.

Kimbrell received her commission after she graduated from the U.S. Air Force Academy in Colorado in 1998, with a Bachelor of Science in general engineering. She later received a master’s in business administration from Touro University in Nevada in August 2005. Kimbrell attended undergraduate pilot training at Laughlin Air Force Base (AFB) in Del Rio, Texas and earned her pilot wings in August 1999. By November, Kimbrell completed Introduction to Fighter Fundamental training at Randolph AFB, Texas. She graduated from F-16 training at Luke AFB, Arizona in August 2000, and became the first African American female fighter pilot in the USAF.

Kimbrell’s first operational assignment was with the 13th Fighter Squadron in Misawa, Japan, from August 2001 to July 2003. She served as an F-16 fighter pilot, and was deployed to Turkey and Saudi Arabia, in support of Operation Northern and Southern Watch. In Operation Northern Watch, Kimbrell was the first African American female to fly in a combat mission for the 35th Fighter Wing, and to employ ordnance in combat. From July 2004 to July 2004, Kimbrell served in the 8th Operations Support Squadron at the Kunsan Air Base in South Korea as F-16 fighter pilot and Chief of Wing Scheduling. She graduated from the Joint Fire Control Course in July 2004 and was assigned to the 15th Air Support Operations Squadron, in Ft. Steward, Georgia.

From August 2004 to June 2007, Kimbrell served as the A-Flight Commander, 1st Brigade Air Liaison Officer. She was deployed to Iraq as the 2nd Brigade Air Liaison Officer during Operation Iraqi Freedom. After her tour was over, she was assigned to the 31st Fighter Wing at Aviano Air Base in Italy, serving as the Aircrew Flight Equipment Flight Commander and Assistant Director of Operation for the 555 Fighter Squadron. Kimbrell served as the course manager for the Air Liaison Officer Qualification Course and instructor with the 6th Combat Training Squadron at Nellis AFB, Nevada, in December 2009, before she separated from active duty and transitioned to the AF Reserves in October 2013. She is currently a member of the 78th Attack Squadron and serves as an MQ-9 pilot and Mission Commander.

Kimbrell has over 2,100 flight hours and has been awarded numerous awards throughout her career, to include five Aerial Achievement Medals, two Air Force Commendations Medals and the National Defense Service Medal. Kimbrell is married to Travis Kimbrell and the couple have two sons, Kade and Jakeb. She currently resides in Las Vegas, Nevada, and works as a course manager and instructor for the Air Liaison Officer Qualification Course, at Creech Air Force Base, Nevada.