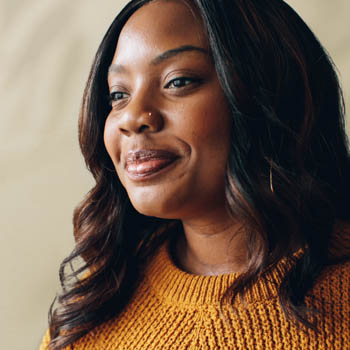 Rhiana Gunn-Wright is an African American environmental activist, policy advisor, and one of the authors of the Green New Deal. Born in Chicago, Illinois on October 15, 1988, she was raised by her mother, Karen Gunn, and grandmother Bertha Gunn. Growing up in the Englewood neighborhood on the South Side of Chicago, Gunn-Wright developed asthma in her childhood due to air pollution in the community. She attended Ted Lenart Regional Gifted Center for elementary and middle school. In the eighth grade, she was awarded the Jack Kent Cooke Scholarship. At age 14, she was accepted into Illinois Mathematics and Science Academy, a public high school in Aurora, Illinois, where she graduated in 2007. 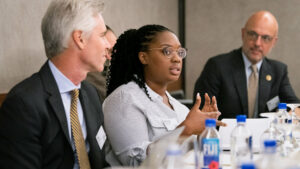 Gunn-Wright started a career in public policy after graduating from Yale. In 2011, she became a fellow at the Institute for Women’s Policy Research in Washington D.C. In the summer of 2013, she served as a White House policy intern in First Lady Michelle Obama’s Office. In 2015, she became a Design Research Fellow at Educational Credit Management Corporation in Minneapolis, Minnesota. She worked as the policy analyst for the Detroit Health Department headed by Dr. Abdul El-Sayed, and then served as the policy director for El-Sayed’s 2018 Michigan gubernatorial campaign. After El-Sayed’s loss in the campaign, Gunn-Wright joined New Consensus, a D.C.-based think tank founded by Demond Drummer, a Chicago-based grassroots organizer, and Saikat Chakrabarti, former Chief of Staff to Rep. Alexandria Ocasio-Cortez of New York.

As the policy lead for New Consensus, Gunn-Wright was one of the intellectual architects of the Green New Deal, a policy proposal for a ten-year economic mobilization to transition the United States to a zero-carbon economy. Alongside Sunrise Movement, a coalition of young climate activists, and Justice Democrats, a progressive political action committee, New Consensus put forward five goals for the Green New Deal: (1) Achieve net-zero greenhouse gas emissions; (2) Create millions of good, high-wage jobs; (3) Invest in the infrastructure and industry; (4) Secure clean air and water, climate and community resilience; and (5) Promote justice and equity. In February 2019, Rep. Ocasio-Cortez and Senator Edward J. Markey of Massachusetts formally introduced a non-binding congressional resolution which called for a ten-year Green New Deal plan to tackle climate change, create clean energy jobs while promoting social and environmental justice. In April 2021, Ocasio-Cortez and Markey reintroduced the resolution to the congress.

In 2019, Gunn-Wright was included in Time magazine’s list of the “15 Women Leading the Fight Against Climate Change.” She is currently the Director of Climate Policy at the Roosevelt Institute, and a member of the Evergreen Advisory Board.

Rhiana Gunn-Wright, “A Green New Deal for All of Us,” in All We Can Save: Truth, Courage, and Solutions for the Climate Crisis, eds. Ayana Elizabeth Johnson and Katharine K. Wilkinson (New York: One World, 2020); Karen L. Smith-Janssen, “The Architect Behind Alexandria Ocasio-Cortez’s Green New Deal Has a Plan to Save the Planet—and All of Us,” https://www.marieclaire.com/politics/a29326190/green-new-deal-architect-rhiana-gunn-wright/;David Wallace-Wells, “Green New Deal’s Rhiana Gunn-Wright: ‘You Just Don’t See This Sort of Change This Rapidly,’” New York Magazine, September 20, 2019, https://nymag.com/intelligencer/2019/09/rhiana-gunn-wright-on-the-rapid-evolution-of-climate-policy.html