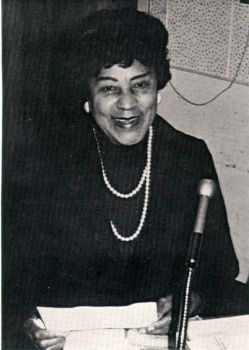 Tarea (Ty) Hall Pittman was a civil rights worker, social worker, and community activist. Born in Bakersfield, California in 1903, she was the second of the five children of William Hall and Susie Pinkney. Her father, a farm laborer who moved from Alabama to Bakersfield in 1895, helped his brothers found the Bakersfield Branch of the National Association for the Advancement of Colored People (NAACP).

Although Pittman experienced racial prejudice in Bakersfield, she did attend integrated public schools and in 1923 enrolled at the University of California, Berkeley.  Black students were not allowed to reside in campus housing leading Pittman to use personal connections to find accommodations.   Through these connections she also met William Pittman, a dental student whom she married in 1927.

Pittman became active in the NAACP and California State Association of Colored Women’s Clubs in the early 1930s.  She served as President of the Association from 1936 to 1938.  Her work with the Association included voter registration and funding orphanages for African American children.  In 1936 she organized west coast branches of the National Negro Congress and assisted in the creation of the Negro Education Council which provided research for and funded Negroes in the News, a radio program devoted to publicizing positive news about the African American community.  Pittman often hosted the programs as well and became a recognized radio personality across the U.S.

After dropping out of school to marry her husband and support his career, Pittman returned to college and received an A.B. in social service from San Francisco State College in 1939.  In 1941, Pittman, anticipating the large scale migration of blacks to the West Coast, began helping the first arrivals from the South integrate into Bay Area communities.  She also organized protests against Kaiser Shipyards and other war industries in 1941 and 1942 to force them to hire African Americans.

Pittman, always an active clubwoman, served as President of the California Council of Negro Women from 1948 to 1951.  She also continued her civil rights work, helping to desegregate the Oakland Fire Department in 1952 and working on behalf of the NAACP, helping to lobby successfully for the California Fair Employment Practice (FEP) bill which was signed into law in 1959 by Governor Edmund “Pat” Brown. Partly because of this success Pittman served as Director of the West Coast Region of the NAACP from 1961 to 1965.  During her tenure, she worked to get FEP laws passed in Arizona, Alaska, and Nevada.

Pittman retired from the NAACP in 1970 but continued to broadcast the Negroes in the News radio program into the late 1970s. After protracted illness, she passed away on July 31, 1991, having been an integral part of the civil rights and social welfare movements in the Bay Area and the West Coast for much of the 20th Century.