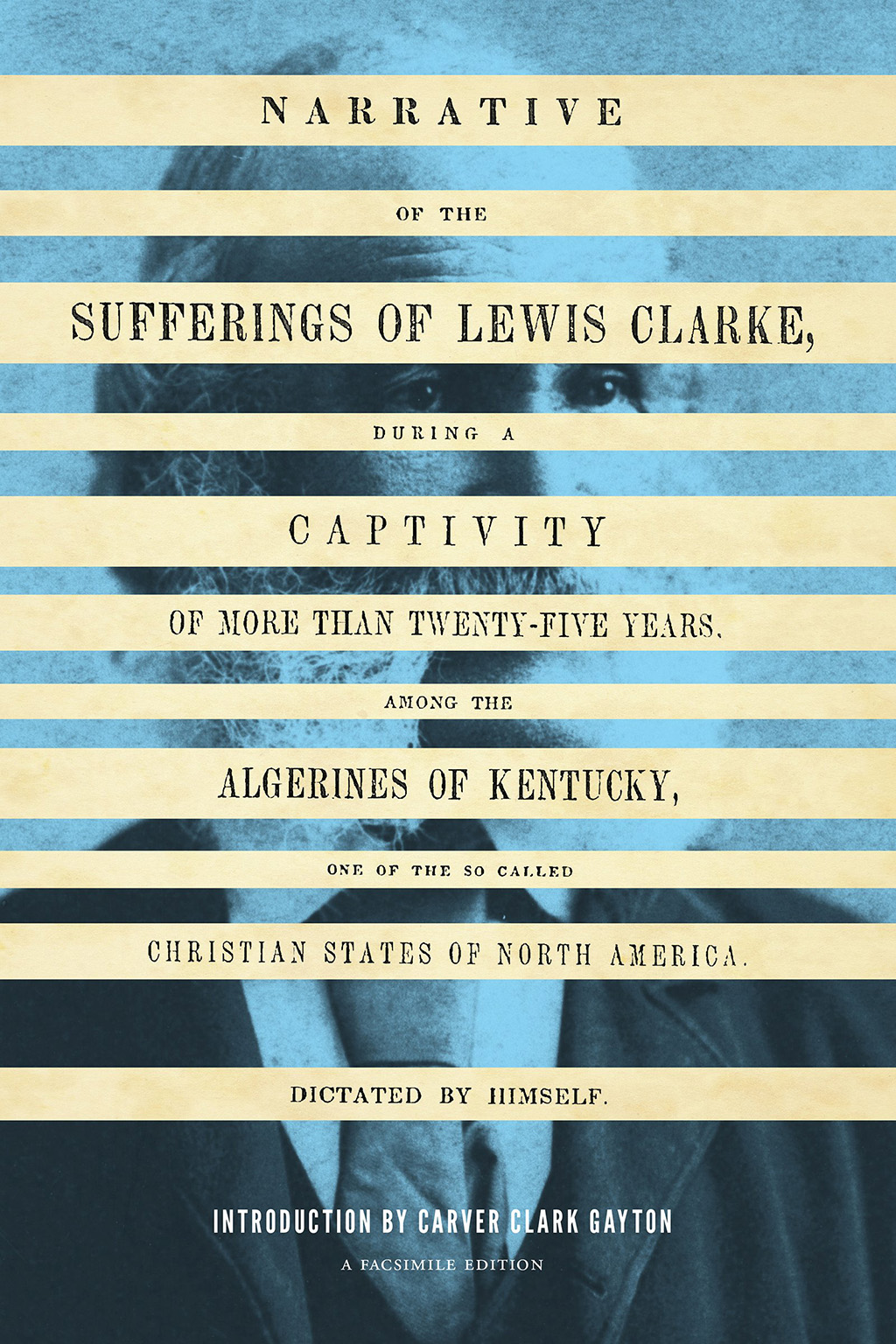 Narrative of the Sufferings of Lewis Clarke (University of Washington Press, 2012) by Lewis Clarke with introduction by Carver Clark Gayton
Fair use image

In the article below Seattle historian Carver Clark Gayton describes his most prominent ancestor, Lewis G. Clarke, who is widely considered to be the model for one of Harriet Beecher Stowe’s main characters in her novel, Uncle Tom’s Cabin.  Here Gayton describes Clarke’s evolving relationship with Stowe and as importantly, Clarke’s role in the larger struggle against slavery.

When I was a child, my mother passed on stories to me and my siblings about Lewis G. Clarke, her paternal grandfather, a slave who escaped from bondage in the early 1840s.  She often read from a book, The Key to Uncle Tom’s Cabin, by Harriet Beecher Stowe, which told of Clarke’s experiences as a slave and verified that the character “George Harris” of her book was based upon Clarke’s early life. Uncle Tom’s Cabin, which was first published in 1852, became one of the most popular novels ever written. It was a best seller in the United States (second only to the Bible) and just five years after its publication it was translated into twenty languages. Stowe published The Key to Uncle Tom’s Cabin one year later to explain and defend how she came to write the now widely popular novel.  The lines from The Key that I remember most vividly were “Lewis Clarke is an acquaintance of the writer. Soon after his escape from slavery he was received into the family of a sister- in-law of the author and there educated.”

At the time I did not appreciate the significance of Lewis Clarke’s life nor his relationship with Harriet Beecher Stowe. I considered it interesting family history, but no more than that. Additionally, whatever luster he had as a figure in history was dulled by the comments my mother said her father made about him, declaring “He was a rolling stone” and was not committed to raising his family because of his travels across the country “making speeches.” Many years later I realized that his travels were the result of his being a famous man. His fame resulted, however, not only by being depicted as “George Harris,” the husband of Eliza, the runaway slave who is one of the central characters in the Stowe novel. My great grandfather was also a prominent leader in the abolitionist movement in the 1840s and 1850s as well as a spokesman for freed people after the Civil War.

By the time of his death in Lexington, Kentucky in 1897, Clarke had developed an international reputation.  His passing was noted in newspapers throughout the world, with full page eulogies printed in major newspapers across the United States. William O’Connell Bradley, the Governor of Kentucky, ordered Clarke’s body to lie in state at the Lexington City Auditorium, the first time in the history of the Commonwealth that such an honor was accorded a black man.

Yet after his death Clarke disappeared from newspapers and other major print media. His retreat into obscurity came because of a variety of reasons.  One was the increasingly negative reaction to the book four decades after the Civil War.  By the earlier twentieth century historians and literary critics began to reappraise the novel, critiquing it because of its racist stereotypes and images.  Over time Stowe’s main character, Uncle Tom, was transformed in hundreds of plays and early film depictions from a noble Christian, willing to suffer rather than renounce his faith, into a cowardly, subservient slave eager to please white people rather than defend himself or other slaves.  “George Harris,” i.e. Lewis Clarke, was in turn deemed irrelevant because of his guilt by association with the novel.

Clarke’s disappearance from the annals of history also came from the actions of Harriet Beecher Stowe and her family. They adamantly declared to the nation when she was near death that her spiritually guided mind was the sole source for the writing of the book. Few Americans of the period dared challenge the account of an author who had been practically deified by millions of people in the United States and around the world during the last fifty years of the 19th century.

Clarke’s legacy was also hurt by twentieth century historians who downplayed the novel as the major catalyst for the Civil War and abolition of slavery.  They did this despite comments from leaders of that time, such as Abraham Lincoln who was quoted as saying after he first met Stowe in 1862, “So you are the little lady who started this Great War.” Additionally, Massachusetts Republican U.S. Senator Charles Sumner claimed Lincoln would never have been elected President if not for the publication of Uncle Tom’s Cabin.

Clarke’s own family also played a role in his later obscurity.  Many of Clarke’s relatives intermarried with whites and were embarrassed by their black heritage. They made concerted efforts, beginning in the early twentieth century, to hide their black bloodlines. Fear of legal action initiated by Lewis Clarke’s brother Milton regarding this matter may have made relatives hesitant to promote Clarke publicly or publish information about him as a former slave.

For all of these reasons Lewis Clarke’s story has been virtually hidden from public view for the past century.  The 2012 release of his autobiography, Narrative of the Sufferings of Lewis Clarke: During Captivity of More than Twenty-Five Years Among the Algerines of Kentucky, One of the So Called Christian States of North America, Dictated by Himself, by the University of Washington Press, is an effort to introduce him to a new generation of historians and readers of history.

Lewis Clarke’s early life is reflected in his Narrative which was originally published in 1845, the same year as Frederick Douglass’s Narrative of the Life of Frederick Douglass.  Clarke’s autobiography begins with his birth in 1815 in Kentucky and continues through the early 1840s when he was living in Cambridge, Massachusetts. The Narrative described what he endured as the child of a Scottish father and a quadroon mother who was a slave on his Madison County, Kentucky plantation. He tells of particularly horrendous experiences after having been sold to cruel plantation owners at an early age. After a second sale to a more compassionate owner, he soon feared a rumor indicating that he was to be sold to a plantation in Louisiana. It was at this point that Clarke decided to escape from bondage and seek refuge in Canada where he assumed his brother Milton had escaped months earlier. He returned to the United States after learning that his brother settled instead in Oberlin, Ohio. Lewis connected with Milton in Oberlin, but soon decided to bring his youngest brother, Cyrus, out of slavery in Lexington, Kentucky. His Narrative also describes how he and his brother Milton were nearly captured by slave hunters in Oberlin before they escaped to Massachusetts.

Clarke’s exploits as an escaped slave were also described in newspaper articles in Ohio as well as word of mouth by anti-slavery abolitionists throughout the state. Abolitionist leaders in the Northeast became aware of him and as a result he was enticed to come to Cambridge, Massachusetts with plans to bolster the abolitionist movement in that state.

While in Cambridge he lived several years in the home of Mary Jackson Safford, the sister-in-law of Harriet Beecher Stowe. Stowe met Clarke, interviewed him on many occasions, and took detailed notes regarding his experiences as a slave.

Clarke’s many lectures and the publication of his Narrative made him a popular figure in the Northeast. He shared speaking platforms with the leading abolitionists of the era including his relative by marriage, Frederick Douglass, as well as Lydia Marie Childs, Lewis Tappan, William Lloyd Garrison, Henry Bibb, Martin Delaney, and the maligned and quixotic martyr of Harpers Ferry, John Brown.  By the late 1840s he moved to the Underground Railroad town of Busti in southwestern New York State. While there he became the vigilante protector of escaped slaves from the South. He also became President of the Radical Abolitionists, a wing of the abolitionist movement whose members armed themselves to protect escaped slaves and if need be, go into battle against the institution of slavery. While in Busti he continued his lectures across the Northern United States as well as Canada.  By the mid-1850s Clarke was held in such high esteem that he was invited to deliver one of the keynote addresses at the founding convention of the Republican Party in Jackson, Michigan in July 1854.

The passage of the Fugitive Slave Law of 1850 allowed slave owners and their surrogates to seek out and capture escaped slaves anywhere in the United States. The new law gave Clarke’s “owners” in Kentucky greater incentive to capture him. He narrowly escaped slave catchers who came to Busti seeking him out in the early 1850s. The close call made him decide to move to Ontario, Canada. Subsequently he married Emily R. Walker, originally from Lexington, Kentucky, and had nine children with his new wife.  Clarke also became a successful farmer and not surprisingly, his property became a haven for escaped slaves from the United States.

In 1874, nine years after the end of the Civil War, Clarke and his family returned to the United States and settled in Oberlin, Ohio. Clarke continued on the lecture circuit which now included the South as well as the North, speaking on his experiences as a slave and reminding the crowds that “George Harris” of Uncle Tom’s Cabin was based upon his life. He also became a labor broker between Southern planters who needed labor and former slaves in Canada who sought work in the post-Civil War South.

In the mid-1890s a controversy arose between Clarke and Harriet Beecher Stowe regarding his role as one of the models for Uncle Tom’s Cabin.  Clarke continued to claim that he was a long time acquaintance of Mrs. Stowe and that she would not have been able to write her book without the information she had received from him. As her life ebbed away, however, she and her family representatives denied any knowledge of him. Her denial came a year before she died and six years into her severe case of dementia.

We will never know why Stowe renounced her connection with Clarke toward the end of her life although events surrounding the publication of her classic Uncle Tom’s Cabin provide some interesting speculations.  Be that as it may, it is important that Clarke’s legacy be defined by more than his relationship with Harriet Beecher Stowe. His contributions to the abolitionist movement, his unrivaled personal commitment to freeing slaves, and his lifelong dedication to human rights, deserve to be celebrated and praised by all Americans.

Lewis G. Clarke, Narrative of the Sufferings of Lewis Clarke, During a
Captivity of More Than Twenty-Five Years among the Algerines of
Kentucky, One of the So Called Christian States of North America,
Dictated by Himself,