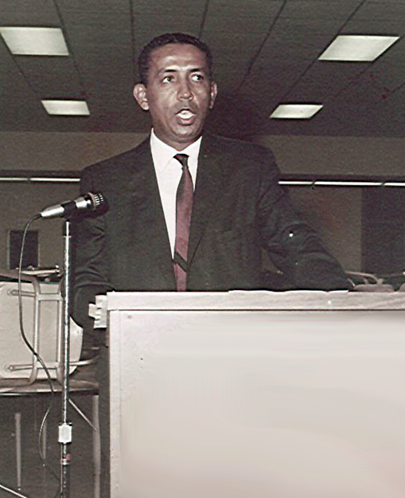 Recognized by Broward County Florida as a successful businessman and civic leader dedicated to economic development, education, and community service, Marcellus Sterling Collins, Sr. continued the early 20th Century legacy of his parents, Richard A. and Leola Collins. Beginning in 1923, his father and mother owned and operated Collins Grocery, the first grocery store in Westside Dania, an African American community in Southeast Florida. They were early civic leaders who called for education and healthcare for blacks in Broward County.

M. Sterling Collins, Sr. born in Dania on June 7, 1919, grew up in that community attending local public schools. He was a valedictorian at Booker T. Washington High School in Miami, Florida, graduating in 1937. He then attended Morehouse College in Atlanta, Georgia, as an economics major and graduated as valedictorian in 1941. At Morehouse, he was the first recipient of the Julius Rosenwald Fellowship (1941). While there he was a member of Morehouse College Club and Omega Psi Phi Fraternity.

In 1939 while still in college Collins married Anita Louis Sweet who was born in Havana, Florida in 1921. Together they raised seven children and remained married until her death in 1990.

Beginning in 1942 Marcellus and Anita, became the owners and managers of commercial and residential properties around South Florida. They also returned to Dania after graduation where he and his brothers, William and Vincent, enlarged and renamed their parents’ original store as the Collins’ Brothers Food Center in 1952. Soon afterwards they opened stores in Fort Lauderdale, Golden Heights, and Miami making them among the earliest African American entrepreneurs to establish a chain of supermarkets in multiple cities. Collins then founded Victory Marketing Associates to help local grocers organize and combine their collective purchasing power. He was also one of the first registered securities agents with Investors Planning Corporation which allowed him to sell stocks and bonds to African Americans in South Florida.

In 1962, Collins founded the South Broward Federal Credit Union, one of the first black-owned credit unions in Florida. He also controlled the Gold Coast Investment Corporation as well as his interests in the Collins’ Brothers Food Center and Victory Marketing Associates.

Marcellus Sterling Collins was also a prominent civic leader. His Dania-Broward County leadership included the following: President of the Optimist Club, Broward Civic Improvement Association, Negro Chamber of Commerce, and Attucks High School PTA. He was a founder of the Dania Housing Authority, co-founder and board member of Hollywood Memorial Hospital; Chairman/Trustee and donor of land for Mt. Zion AME Church and Treasurer for Collins Elementary PTA (named in honor of mother in 1959). Collins was a trustee for Provident Hospital, and Booker T. Washington High School. Beginning in 1972 he also taught small business management, vocational, and adult education classes at local schools.

In 1987, the Florida Board of County Commissioners and the Historical Commission recognized and proclaimed Marcellus Sterling Collins as “Modern pioneer in the growth and development of Broward county.

Marcellus Sterling Collins died in Aventura, Florida on December 7, 2018. He was 99 at the time of his death. This three-generation legacy of business and civic leadership continues with the children of M. Sterling Collins who operate the Global Learner’s Academy in Dania Beach, Florida.