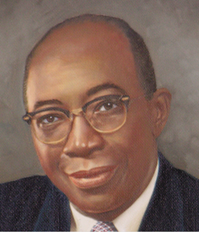 Educational administrator Lyman Beecher Brooks, the first president of Norfolk State University, was born on May 27, 1910, in Blakes, Virginia, to a farmer and pianist, John Robert Brooks, and Mary Anna Burrell Brooks, a schoolteacher, and graduate of Virginia Union University. He began reading at three years of age and received his early education in a one-room school where his mother taught. Because Mathews County had no high school for African Americans, Brooks lived with an aunt while attending the Middlesex Training School in Richmond, offering three years of secondary education. He spent his fourth year of high school at Virginia Union University’s secondary school in Richmond and then majored in mathematics. Brooks graduated second in his class.

Brooks taught at the Middlesex Training School until 1934 when he became a founding principal of the new Essex County High School. In 1937, Brooks received a Master of Arts degree in education from the University of Michigan in Ann Arbor. Five years later, in 1942, he earned the Doctor of Philosophy in education from the same institution.

In 1938 Brooks became the director of the Norfolk junior college division of Virginia Union University in a room in the black Young Men’s Christian Association (YMCA) in the vicinity of Church Street and Tidewater Park (Gardens). By the end of the academic year, 1939, the college had 115 students. In 1942, the junior college became a separate entity called Norfolk Polytechnic College with Brooks as its first president.

In 1951 following appropriations from the Virginia legislature, 55 acres of land in Norfolk was allotted for the development of the physical infrastructure of Norfolk’s first HBCU. It would be located near the center of the city. In 1969 Norfolk State College became an independent institution when it severed its ties with Virginia State University.

During this entire period Brooks remained president of the institution. On December 27, 1954, President Brooks married Evelyn Fields, a local schoolteacher, and they parented two daughters. Between 1962 and 1964, Brooks chaired a project funded by the Cooperative Research Branch of the United States Office of Education to study the effectiveness of vocational education in assisting unskilled workers in securing jobs. President Brooks was a joint-author of project reports published as “Training the Hard-Core Unemployed: A Demonstration-Research Project at Virginia State College, Norfolk Division,” in 1964 and “Re-Education of Unemployed and Unskilled Workers,” in 1965.

In 1979, four years after Brooks retired, Norfolk State College became Norfolk State University. The state had authorized the college to grant master’s degrees in 1972, and two years later, in 1974 the Graduate School of Social Work began operation. Throughout the school’s growth, it remained committed to Brooks’ conviction that any student could be educated given excellent teaching and motivation. Thus, the school offered honors programs for the most talented students and remedial programs for those less prepared.