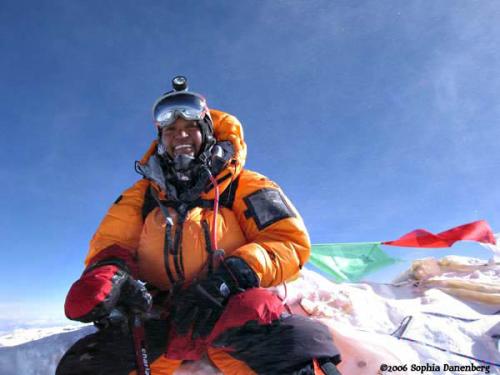 In 2006 Sophia Danenberg became the first African American and first black woman from anywhere in the world to climb the highest mountain in the world, Mount Everest in the Himalayas (Nepal).

Sophia Marie Scott was born in 1972 in Homewood, Illinois (a southern suburb of Chicago) to a Japanese mother and black father. She attended Homewood-Flossmoor High School, graduating in 1990.  Danenberg then studied environmental sciences and public policy at Harvard University, graduating in 1994, before going on to Keio University in Tokyo as a Fulbright Fellow. Danenberg then began her professional career with United Technologies in Japan and China, managing energy and indoor air quality projects, before moving to Hartford, Connecticut where she worked in green technology research programs at United Technologies.

Danenberg became involved in mountaineering in 1999 after a childhood friend encouraged her to try rock climbing.  During this two year period, while doing technical climbs through her local Appalachian Mountain Club Chapter, she met her future husband David Danenberg.

In the spring of 2006, at age 34, with one week of planning, Sophia Danenberg began the climb of Mount Everest in Nepal, the highest mountain in the world at 29,000 feet. Danenberg, along with eight people, signed up for an “unguided” climb which gave her the help of two Sherpas, weather reports, food, and oxygen.  Danenberg carried her own gear and pitched her own tent.  She had no guide on the climb to make decisions for her. On May 19, 2006, after two months climbing, she and her party reached the summit of Mount Everest.

Danenberg, who had as of 2008 climbed 19 peaks, was responsible for legislative and regulatory affairs for Global Environmental, Health, and Safety (EH&S) at United Technologies’ Pratt & Whitney division. She persued a master’s in economics at the University of Connecticut, as well as working with Hartford, Connecticut inner city programs. Danenberg campaigned for Democratic Party Candidate Barack Obama in the 2008 Presidential Election and became a delegate to the Democratic National Convention in Denver, Colorado.