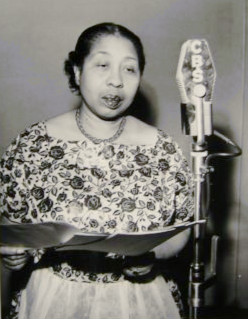 Amanda Randolph, one of the first black performers to appear consistently on television, was born in 1896 in Louisville, Kentucky. She began performing as a young teenager in Cleveland’s musical comedies and nightclubs. In the 1930s, she toured Europe and performed in several hit musical revues such as Chilli Peppers, Dusty Lane, and Radio Waves.

Randolph began her film career as an actress appearing in Swing (1938), Lying Lips (1939) and The Notorious Elinor Lee(1940)—three of Oscar Micheaux’ race films, which he routinely created for nearly three decades to appeal to black audiences and offer a truer reputation of black life than most Hollywood productions.

During the 1940s, Randolph and her sister Lillian were featured on the long-running popular radio show Amos n’ Andy. Amanda Randolph also worked on other radio productions such as Kitty Foyle and Big Sister. During the 1950s, she appeared in several Hollywood movies including No Way Out (1950) and She’s Working Her Way Through College (1952). In 1953, Randolph transitioned to television roles, appearing as the family housekeeper, Louise, on The Danny Thomas Show (also known as Make Room for Daddy). She also became one of the only two members of the Amos n’ Andy radio cast to be accepted for the television version, which was the first television series to feature an all-black cast. Randolph played the mother-in-law of Kingfish until the shows cancellation in 1953.

Randolph died following a stroke in 1967 in Duarte, California. During a film career that spanned three decades, Randolph brought true dignity to the tough-talking character she often depicted despite limited parts to which she was consigned.